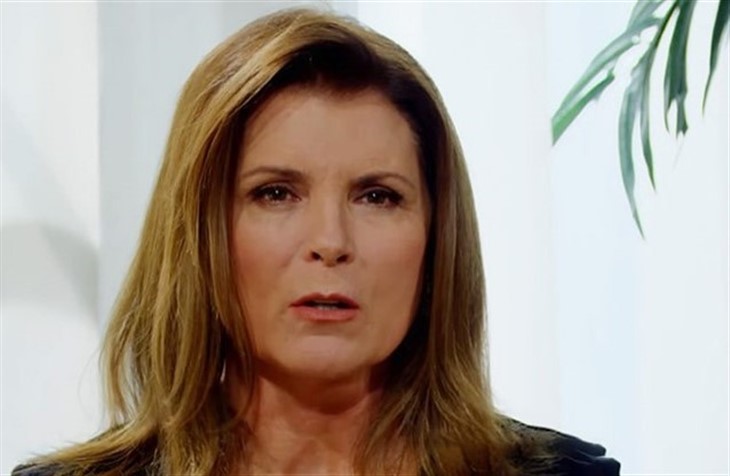 The Bold and the Beautiful spoilers document that Sheila Carter (Kimberlin Brown) wanted to trust Li Finnegan (Naomi Matsuda). But that is not possible after interrupting her call for help.

The next dramatic turn was anticipated by viewers. While Li played up her bond with Sheila, she did not trust the woman who put John Finn Finnegan (Tanner Novlan) in that hospital bed.

Sheila remains unhinged, talking of another opportunity to be a mother to her son. She appears incapable of realizing that if Finn regains his senses, he will be furious that she shot him. He is eventually bound to learn that she shot Steffy Forrester Finnegan (Jacqueline MacInnes Wood).

When someone chooses to become a fugitive, there must be an endgame. If not, the likelihood of being captured or killed increases tenfold.

Sheila escaped from lockup with the help of her old accomplice, Mike Guthrie (Ken Hanes). That criminal act put Sheila on the run, with her first and only intended destination being Li’s residence.

It was irrational to think that she and Li would care for Finn until he fully recovers. But to believe that she can further Finn’s recovery without Li is just as kooky.

Why did Li pull her smartphone out while standing in the hallway outside of Finn’s room? She knew that Sheila was in there.

Instead of waiting until she at least exited the apartment, house, or whatever structure Li has been living in with Finn, Matsuda’s character placed a desperate call for help. Sheila naturally caught her and pushed the phone out of her hands.

The above followed Li opening the door to Sheila in the first place. That made no sense and, along with the phone call, reflected Li’s frantic state of mind.

Finn is clearly in a very vulnerable state. Li’s tell to Sheila, about needing to restock his medicine, may or may not have been true.

However, Finn needs a stable environment and consistent care so that he has the chance to recover. Sheila’s arrival and confrontation with Li, which is teased to become life-threatening, is another way his birth mother degrades his life.

Sheila has not always won every confrontation she has been written into. However, her presence always includes destruction and sustained mayhem. So, Finn will soon need to regain his health and attempt to control Sheila himself.