B&B Spoilers: While Deacon’s Away, Sheila Plays – With Hayes 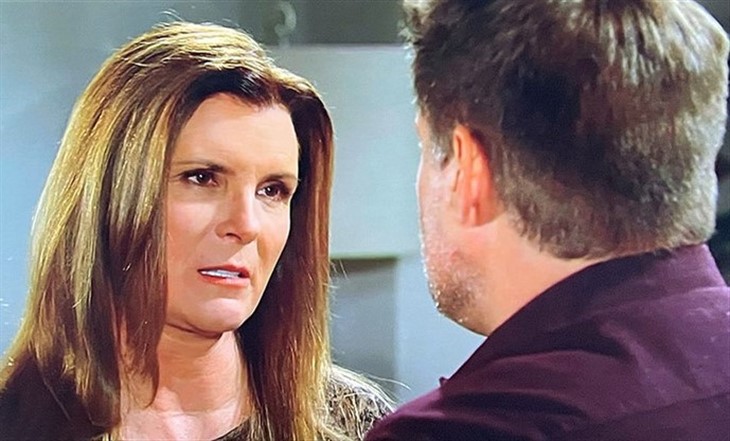 The Bold and The Beautiful (B&B) spoilers and updates tease that while Deacon Sharpe’s (Sean Kanan) away, Sheila Carter (Kimberlin Brown) plays – with her grandson, Hayes Finnegan (Iliana and Vienna Norris). Somehow Sheila manages to slip away from Deacon’s apartment while he’s gone, and into the cliff house in her disguise as “Nicholina”.

The Bold And The Beautiful Spoilers – New Nanny?

Perhaps Deacon isn’t the only one who’s away for a little bit, maybe Amelia (Nicola Posener) needs a little break as well, and Sheila seizes on the opportunity to be Hayes’ nanny. Deacon will soon be occupied with helping his ex-wife Nikki Newman (Melody Thomas-Scott) dig up dirt on another crazy lady he had no business helping years ago, Diane Jenkins (Susan Walters).  Diane bought a house in Los Angeles before moving to Genoa City, that might be a better place for Sheila to hide out.

If Deacon was in town and just at work, he’d be following Sheila to the cliff house and stopping her from entering just like he did recently. This is bound to take place when Deacon’s helping Nikki dig up Los Angeles dirt on Diane.

B & B Spoilers – Hope Spencer As A Reference?

Hope has only met “Nicholina” one time when she showed up looking for her dad and he wasn’t there. “Lina” as she goes by for short, seemed vaguely familiar to Hope but she didn’t realize she was Sheila in disguise. All she knows is that her dad has a new girlfriend and perhaps “Lina” realizes that Hayes needs a nanny while Amelia’s away. Perhaps she convinces Hope to give her a reference to John “Finn” Finnegan (Tanner Novlan) and Steffy Forrester Finnegan (Jacqueline Macinnes Wood). But with Sheila, there’s also a possibility that she creates that vacancy for herself, arranging for Amelia’s “absence”.

Sheila is overjoyed when she gets a chance to hold the baby, who has grown like a weed since she saw him last Christmas. He’s already using sippy cups and she gives him one to distract him from trying to pull her mask and wig off. She’s thrilled that Hayes really seems to like his new nanny “Lina” and she never tires of playing with him.

Mommy and Daddy seem to like “Lina” too, and they don’t see through the disguise at all. Even Taylor Hayes (Krista Allen) approves of “Lina” and is happy that she can cook, too, saving money on take out and taking some of the cooking burden off her.

GH Spoilers: Sasha Makes A Big Decision, On The Road To Healing?