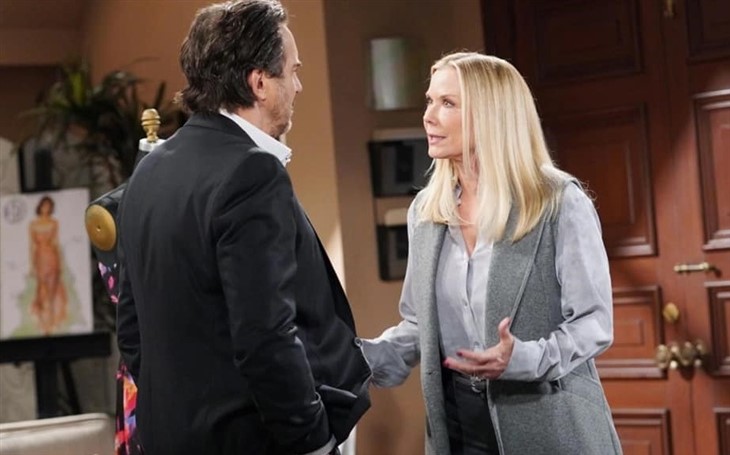 The Bold And The Beautiful Spoilers – Threatened By A Knife

Brooke came over to confront Thomas about Douglas not being safe and felt threatened by a knife he was showing his son how to peel and cut an apple with. Thomas let Douglas hug Grandma Brooke then sent him out of the room for grownup talk and let Brooke know how ridiculous she was being. One could tell by her facial expressions every time Thomas made an unconscious gesture with the knife in his hand she just knew he would plunge it into her heart.

Thomas’ attitude seemed to be, “paranoid, much?” as he assured her the next time he’d use an apple peeler if she was so upset over him murdering fruit in cold juice! Brooke’s mood was Thomas was a psycho waiting to give her a non-cosmetic peel.

B & B Spoilers – Douglas Forrester Belongs At Home

Brooke kept up her tirade, telling Thomas the Forrester mansion was not Douglas’ home and he was her grandson and he had no say. Thomas stood his ground and told her Douglas’ home is there with him, his father, and his adoptive mother Hope Spencer (Annika Noelle) was welcome anytime, implying Brooke, not so much. Brooke made a threat and went back home, and a few days later Ridge is there with Thomas and two CPS agents show up. Thomas had told Ridge about his and Brooke’s fraught encounter and Ridge isn’t surprised, she’d mentioned she’d call them if she thought the situation warranted it. Ridge heard Brooke say it, so it’s easy to figure she was the one who reported concerns over Douglas’ safety.

The Bold And The Beautiful Spoilers – Overstepping, Much?

Thomas’ opinion of Brooke may have been “paranoid, much?” but Ridge is thinking “overstepping, much?” thinking Brooke is overstepping by calling Child Protective Services because Hope felt threatened. He takes it as a betrayal on Brooke’s part but manages to calm the suspicions of the social workers, and then calls her.

Brooke claims she didn’t call them, and he wants to believe her but she doesn’t want to discuss the matter. For the time being, he has things smoothed over and she seems to understand where he’s coming from and he hopes the CPS visits are over.