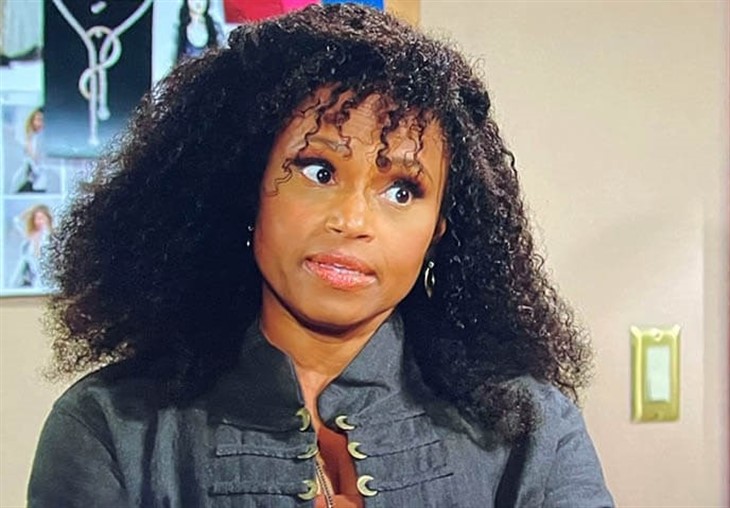 The Bold and the Beautiful Spoilers – Paris Buckingham’s Bombshell

B&B spoilers reveal that Grace absolutely adores Zende and thinks he’s perfect for Paris. So, Grace was stunned when Paris admitted to knowing about Zende’s date with a Forrester Creations model. Grace pushed for an explanation, which led to Paris saying that she wanted her freedom.

Grace feels that Paris is making a huge mistake. It’s not just Paris not wanting to marry Zende that concerns the doctor. Grace doesn’t like that Paris is getting cozy with Carter. The doctor is concerned that Carter is the “riskier choice” and actually compared him to Reese Buckingham (formerly Wayne Brady).

Grace knows about Carter breaking Zoe Buckingham’s (formerly Kiara Barnes) heart and the affair with Quinn. Of course, Zoe wasn’t an innocent victim and actually tried seducing Zende while she was engaged to Carter. Of course, Zoe probably didn’t tell Grace that part of the situation!

The Bold and the Beautiful Spoilers – Threatening Carter Walton

The Bold and the Beautiful spoilers reveal that Carter will be confronted by Grace about the forbidden kiss. Carter is thrown for a loop when Grace starts threatening him, though. Grace takes it a step further by blackmailing Carter. She demands Carter stay away from Paris or she’ll make good on her threat.

So, how does Quinn fit into all of this? Speaking to Soap Opera Digest about February sweeps, co-head writer Michael Minnis teased that Quinn will wonder why Zende and Paris haven’t announced their engagement. Quinn will snoop around for information, just as she always does.

Remember, Quinn probably still has the hots for Carter. Plus, Quinn hasn’t forgiven Paris for telling Brooke Logan Forrester (Katherine Kelly Lang) about “Quarter.” Quinn always looks for ways to punish her enemies. This could include approaching Grace with a proposition to “save” Paris. The result just might be Paris’ entire life and career being due to Grace’s alliance.

What do you think Grace is going to do about Carter and Paris? Will Quinn find out the reason why Zende and Paris never announced an engagement? Could Quinn get revenge by using Paris’ own mother? Tell us your theories and remember to keep watching the CBS soap to see what happens next.