B&B Spoilers: Ridge Gets Quite A Stunner 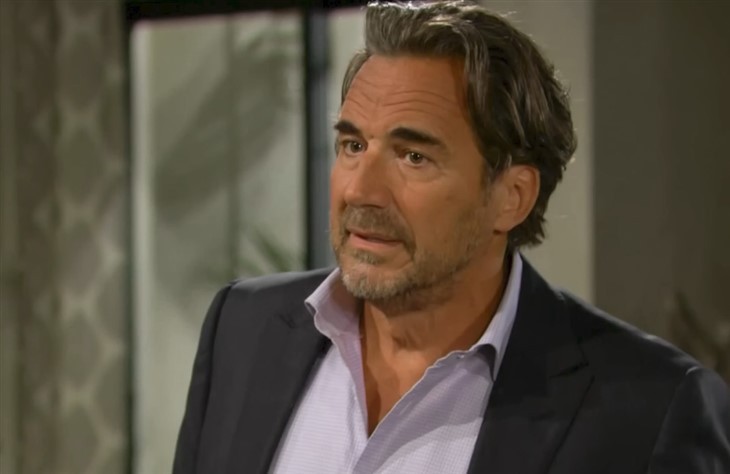 The Bold and the Beautiful (B&B) spoilers for Tuesday, September 27, 2022, reveal that it’s not a good day to be Ridge Forrester.

Ridge (Thorsten Kaye) is torn enough between Taylor Hayes (Krista Allen) and Brooke Logan Forrester (Katherine Kelly Lang). He definitely feels something for Taylor, but he is married to Brooke and there has always been this pull towards her for much of his adult life.

However, that doesn’t mean he wants an earful from her regarding his son, but Brooke doesn’t care cause she is hopping mad. Thomas Forrester (Matthew Atkinson)was disgustingly rude to her (as she was being rude to him) and dared use a knife to cut apple slices and eat those slices right in front of her. That was downright frightening to Brooke and she lets Ridge know it.

Thomas has not turned his life around no matter what he tries to make anyone believe. Brooke just knows it and she wants Ridge to wake up to the truth. Thomas just can’t be trusted around a child. Ridge tries to defend his son but then he just walks away because it’s all just becoming too much.

However, Ridge’s day is about to go from bad to worse. He is home comfortably at Eric Forrester’s (John McCook) big mansion with Thomas and then CPS shows up at the door to check on Douglas Forrester’s (Django Ferri) welfare. Both men are stunned and are able to easily demonstrate that Douglas is just fine.

That doesn’t mean they both don’t have their suspicions about who made the call. It had to be Brooke, right? Who else would do it? She’s been adamant that she still thinks Thomas is dangerous and neither man would put this past Brooke if she thought this could benefit her precious daughter, Hope Logan Spencer (Annika Noelle).

As Ridge gets ready to accuse Brooke, he better make sure this is something she can forgive if she actually was NOT the culprit. But if Brooke didn’t do it, then who did? This does not sound like something Hope would think of. Stay tuned to The Bold and the Beautiful weekdays to see how these stories play out.

Y&R Spoilers: Diane Is Put In The Hotseat