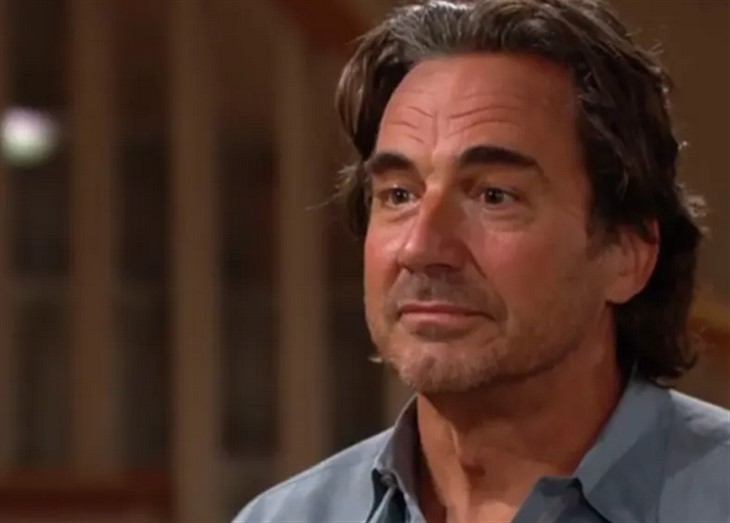 The Bold and the Beautiful spoilers document that Ridge Forrester (Thorsten Kaye) needs to clear his head. Taylor Hayes (Krista Allen) supports the man she loves, telling him that she understands why he left the cliff house. However, Taylor also told Ridge that he has been missed since leaving.

Taylor’s approach indicates unconditional support. In contrast, Brooke Logan Forrester (Katherine Kelly Lang) has aggressively and repeatedly stated that Ridge belongs back at her home because she is his wife.

Viewers could read into something Ridge said after he and Taylor filled in their son about Sheila Carter (Kimberlin Brown). Ridge was upset because Steffy Forrester Finnegan (Jacqueline MacInnes Wood) overheard Thomas talking with Sheila about the champagne label switch.

That would have been okay if Thomas Forrester (Matthew Atkinson) relayed what he forced out of Sheila the day it happened. But Atkinson’s character kept that information to himself to further what he believed were reconciliation efforts.

Ridge sternly told Thomas that it was his call to make, not his son’s. Kaye’s character told Taylor that he would always be there for her and their kids prior to Thomas’ arrival.

Bold And The Beautiful Spoilers – Taylor Hayes Is Too Nice

Taylor’s love for Ridge is not hidden. She also has been open about hoping to reconcile with him.

As viewers recall, Taylor was mostly respectful of Ridge’s marriage to Brooke. But she got the message when Ridge left Brooke in the recent past and moved into the cliff house that marriage was on shaky ground.

However, Taylor’s tell to Ridge, saying that she will support whatever decision me makes, is a message to him. If he goes back to Brooke, she will accept it.

B&B Spoilers – Ridge Forrester Has Not Divorced Or Recommitted

Ridge has more of what feels like a deep friendship with Taylor as this point in their personal history. They have not been married for a long period, with multiple remarriages to Brooke being part of Ridge’s spotty romantic history.

Upon returning from Africa, Taylor told Steffy and Thomas that she did not want to have her heart broken by Ridge again. That is why she was hesitant to pressure him and is supporting his move to his dad’s house now.

Ridge has not divorced Brooke, and he has not committed to Taylor. While he is sincere in saying that he will always support Steffy and Thomas, there is no current evidence that indicates Taylor will be his wife again.