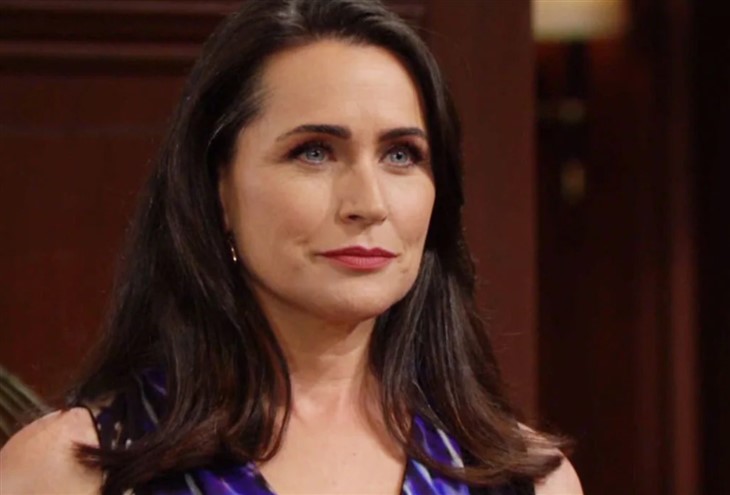 The Bold and the Beautiful spoilers reveal Carter Walton (Lawrence Saint-Vincent) and Quinn Forrester (Rena Sofer) are no longer together (Rena Sofer made her exit on August 29, 2022). It seemed like Carter and Quinn really loved and cared for each other. What could have happened to cause them to break up? Where is Quinn now?

The Bold And The Beautiful Spoilers – Love Story Ends

B&B spoilers reveal that Carter and Quinn’s relationship may not have started off in the most honest way, after their betrayal was revealed, Quinn’s husband at the time Eric Forrester (John McCook) ended up giving them a very awkward blessing to continue their intimate relationship after he revealed he was suffering from impotence and Quinn should still be able to enjoy that part of a relationship.

As we all know though this did not end up working out for anyone involved and it was also revealed that Eric was having an affair with Donna Logan (Jennifer Gareis). Quinn and Carter still fought to be together and it was so satisfying for them to finally unite and become a couple. I have a few theories as to why. I honestly think that the age difference is the biggest thing that came between them.

Carter has talked about wanting a family and children and Quinn knows that is not something she would be able to provide for him. Yes, there are many different options when it comes to having a child nowadays, I just don’t think Quinn would want to have to go through the baby stage all over again.

While Carter may say that having children isn’t necessarily a must, Quinn will know better than to believe him. She does have a good heart and I don’t see her being selfish enough to keep that dream from him so she broke things off and left town.

The Bold And The Beautiful Spoilers – Chance At Redemption

The Bold and the Beautiful spoilers reveal that Quinn is an extremely talented jeweler and another thing I could see happening would be her taking a better job offer in a more exotic location. She could be looking for a way to start over and moving overseas is the perfect opportunity to do so.

Carter and she could have talked it over, maybe he at one point thought he would leave with her. His commitment to the Forresters is too great and he has a lot of opportunity and growth with them to leave now.

Instead of a permanent break up could this just be a see ya later kind of break up? They may want to reunite one day but for now, this is the best choice for both of their careers. Whatever happened between the two it is sad to know that this relationship has come to an end.

EastEnders Reveals The Aftermath Of Phil Fleeing From Walford