B&B Spoilers: No Real Exit For Quinn? How Absence Could Be Explained 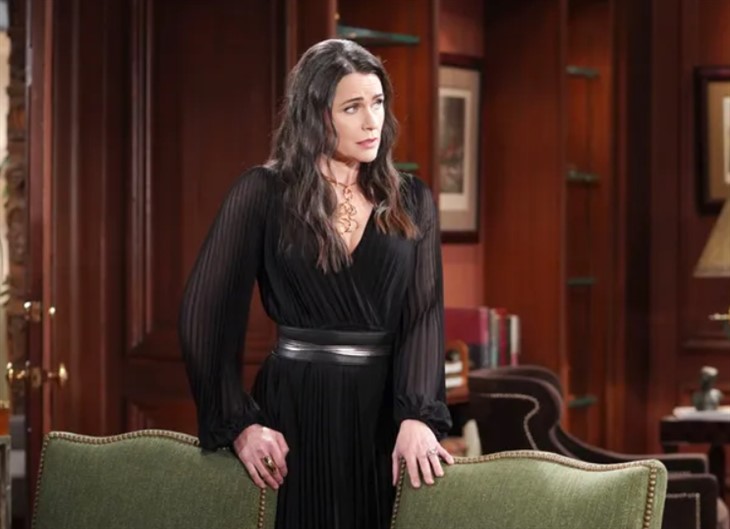 The Bold And The Beautiful (B&B) spoilers suggest that the August 29 romantic dinner between Carter Walton (Lawrence Saint-Victor) and Quinn Forrester (Rena Sofer) was her air date. Fans took to social media to voice their disappointment for what they felt was a huge lack of hoopla for the star’s send-off after nine years. Was this date a mistake or has Sofer exited with nothing more than a kiss from her leading man?

The Bold And The Beautiful Spoilers – Has Quinn Forrester’s Send-Off Date Changed?

The Bold and The Beautiful spoilers reveal that Quinn’s send-off date may have changed because of an offset due to shows being preempted here and there but since there hasn’t been enough of that to delay Rena’s exit more than a day or two. After all, Rena’s last day of filming was August 5 which left about three weeks of episodes to air.

However, if Rena’s exit was announced to the network close to the time of her last filming date, that would make perfect sense. Perhaps there just was no time to film anything to explain Quinn’s abrupt exit. Sometimes characters’ exits are simply word of mouth and nothing more. The longing looks between Quinn and Carter in this episode certainly didn’t seem like they were parting ways any time soon.

Bold and Beautiful Spoilers promised an unexpected death would occur this summer. Well, John “Finn” Finnegan (Tanner Novlan) died but returned, and Steffy Forrester (Jacqueline MacInnes Wood) and Sheila Carter (Kimberlin Brown) have returned so could Quinn be the one to die? Perhaps Quinn is the one person who recognizes Sheila and is killed to keep her secret. Quinn’s death could be announced by word of mouth with a big murder mystery.

Since Quinn seemed to have some work left to do at Forrester, perhaps Carter leaves her and goes home as she finishes up for the evening and Quinn gets killed on her way home. Soaps often have older men die in their lovers’ beds so this is another exit strategy for Quinn if Rena’s exit has already taken place. However, perhaps there is one thing no one has thought to mention. What if Rena’s exit is not Quinn’s exit?

The Bold And The Beautiful – Could B&B Executives Recast Quinn?

Perhaps there was no exit story because Quinn is not gone. Rena may have left the show but that doesn’t mean Quinn necessarily had to. Could Carter simply wake up with a new Quinn in his bed and there be no discussion of Rena’s exit at all? Although this might be a bit disrespectful to Rena, stranger things have certainly happened. Will Quinn’s exit be explained or will Quinn simply be recast without a word? Keep checking back to see what happens.

Y&R Spoilers: Diane Rolls It Off, Phyllis & Nikki Will Fail