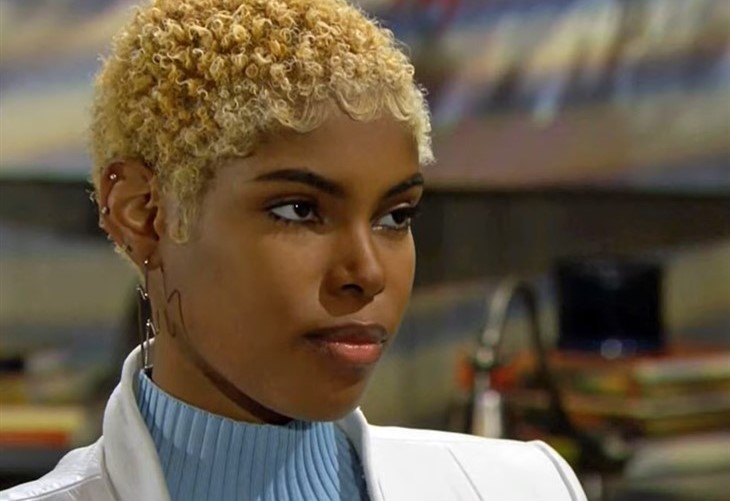 The Bold And The Beautiful (B&B) spoilers indicate that Paris Buckingham (Diamond White) is about to show her true colors. It seems that fans are about to learn why Zoe Buckingham (ex-Kiara Barnes) didn’t want her sister around. Does Paris have a dangerous side hiding under her social worker attire?

The Bold And The Beautiful’s Paris has had every man at Forrester Creations fawning over her since she hit town. Paris seems so sweet and innocent that no one understood why Zoe didn’t want her around. However, it seems that Zoe’s reasonings are about to come to light now that Paris is not getting her way. Spoilers indicate that Paris will come clean to Zende Forrester (Delon de Metz) about her feelings for him. Paris doesn’t love Zende and does not want to be with him. Paris may even tell Zende that her mother, Grace Buckingham (Cassandra Creech) forced her to return to him. Paris may also reveal who the man is that she is in love with, her sister’s ex-fiance, Carter Walton (Lawrence Saint-Victor). Paris could easily ruin Zende and Carter’s friendship even if she doesn’t get her man.

The Bold And The Beautiful’s Carter didn’t right for his relationship with Paris largely because he is still in love with Quinn Forrester (Rena Sofer). Quinn has already admitted that she misses Carter as well and Paris could push Quinn to face those feelings. However, Paris will be scorned considering she defied her mother to be with Carter. Paris may even decide that Carter is the cad that Zoe believes him to be.

After The Bold And The Beautiful’s Paris tells Zende the sorted truth about her and Carter, Paris will head straight to Carter to give him the news. Unfortunately, Carter is not going to be on the same page as Paris. Carter has no intention of letting Grace ruin his life by rekindling a relationship with Paris. Carter told Paris it was over and he meant it. Paris is the one who let the cat out of the bag about Quinn and Carter’s affair. Changes are by the end of the week she will be threatening to sing like a bird again. However, two can play that game. Will Quinn call in Grace for reinforcements? Does Quinn figure she can handle Paris on her own?

Paris could end up costing Carter his job at Forrester, will she put Quinn’s life in danger as well?