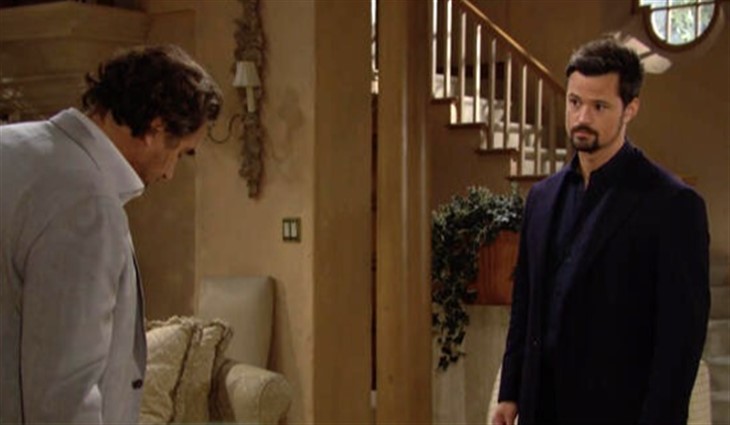 The Bold and the Beautiful (B&B) spoilers show that the truth has been revealed, the wedding has been spoiled, and Ridge Forrester (Thorsten Kaye) now knows that it was his own kid who made the CPS call on Brooke Logan (Katherine Kelly Lang). Steffy Forrester (Jacqueline MacInnes Wood) and Douglas Forrester (Henry Samiri) dropped the truth bomb on Thomas Forrester (Matthew Atkinson), and things aren’t looking good for him.

While we’ve already discussed the likelihood that his son, Douglas, could reject him, I believe it’s also safe to say that Ridge will want his space away from his son, who destroyed his marriage and lied about his wife. With this falsehood, Thomas will destroy many relationships, and it will take a long time to rebuild trust.

The Bold And The Beautiful Spoilers – Will Ridge Forrester Return To Brooke Logan Now?

This opens the door for Ridge to return to Brooke, as even Taylor Hayes (Krista Allen) believes the whole thing was a mistake and that Ridge married her under false pretenses. While she didn’t say anything, you could tell by the look on her face as she walked downstairs.

Based on the acts of Douglas, Steffy, and Ridge, I believe it is safe to say that Thomas will not be invited to the family Christmas celebration. With this single falsehood, he may have cut himself apart from his family, and they will keep their distance from him. He’s demonstrated that he doesn’t care for them and is willing to say anything to get “his way.” I don’t care what he felt he was doing was right; he was clearly wrong, and he should pay for it.

After all, is said and done, I would not be surprised if we didn’t hear from Thomas for a very long time. Who is going to want to be around him after what he did and continuing to force his son to cover up the lie and ruin his family’s relationships?

Thomas may need to take a long ‘vacation’, deal with his own demons and allows time for his family to come to grips with what he did. Whether or not he’ll be able to repair his relationship with his son and father is up in the air, and while I’m sure they will eventually try to make it right, what will it even be like?

What do you think? Should Ridge stop talking to Thomas and cut him out of his life for a while or will they be able to reconcile shortly? Share your thoughts and remember to keep watching the CBS soap to see what happens next.