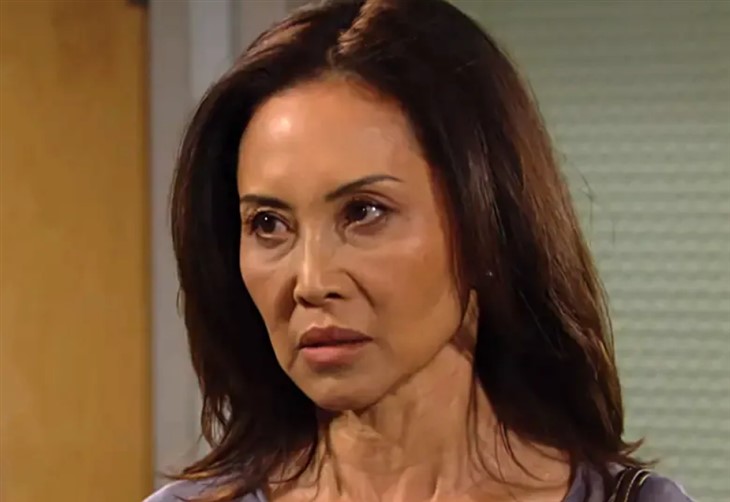 The Bold and the Beautiful (B&B) spoilers for Monday, June 20, 2022, reveal Sheila trying to figure out to do now that Finn is waking up.

It didn’t take long for Sheila Carter (Kimberlin Brown) to do what Sheila Carter does best when she saw Li Finnegan (Naomi Matsuda) run to John ‘Finn’ Finnegan’s (Tanner Novlan) side as he started to finally make sounds and open his eyes. She resorted to violence and clocked Li right over the head and now she needs to figure out what to do with the woman and what to do with her son.

But Li isn’t about to give up without a fight because you can’t keep a good mother bear down. This leads to another confrontation between the two women, both of whom have a little bit of the crazy going on. However, Sheila was mistaken and Li is not quite as crazy as she is. However, this is a formidable match between two women fighting over who gets to care for one grown man they both see as their son. Maybe Finn will fall right back into his coma just so he doesn’t have to deal with what’s going on around him.

B&B Spoilers – Carter Walton Is About To Do Something Dumb

For some reason, Carter Walton (Lawrence Saint-Victor) really wants to have a woman by his side no matter what of late. He proposed to Zoe Buckingham (Kiara Barnes) after a handful of dates. He fell hard for Quinn Fuller Forrester (Rena Sofer) and is not quite over that at all. But Quinn has rejected him and Paris Buckingham (Diamond White) is there, ready, and willing to be and do whatever Carter wants — as long as that means she ends up with Carter. Her mother, Grace Buckingham (Cassandra Creech), may not like it, but she doesn’t care.

Well, Quinn cares because something in her gut tells her Paris is definitely the wrong woman for Carter. Yes, deep down she does want the man for herself, but at this point she’d even be fine with him taking Zoe back if she ever returns. To that end, Quinn will do her best to talk Carter out of asking Paris to marry him because she know it will be one of the biggest mistakes that Carter would ever make.

Will Carter plea for Quinn to leave Eric Forrester (John McCook) just one more time before he makes his decision? She will reject him, but she will also soon learn to regret that decision for reasons she cannot even imagine yet. Stay tuned to The Bold and the Beautiful weekdays to see how these stories play out.

Days Of Our Lives Spoilers: Sarah Goes On The Warpath