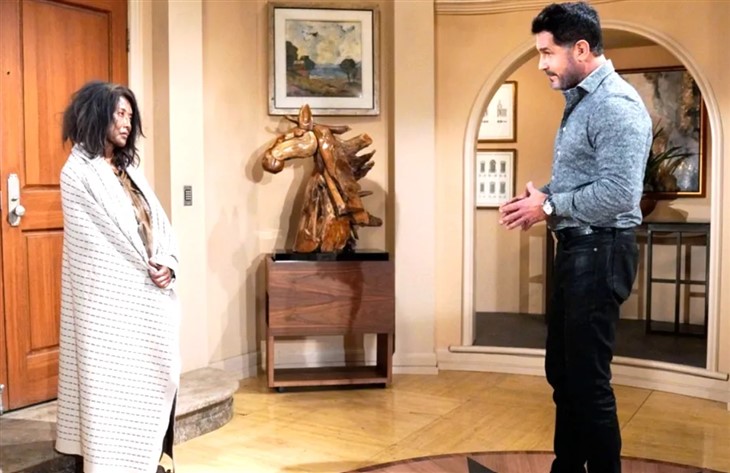 The Bold and the Beautiful (B&B) spoilers reveal that Bill Spencer (Don Diamont) rescued Li Finnegan (Naomi Matsuda). Bill will also help save John “Finn” Finnegan (Tanner Novlan). While a love story is teased, perhaps the dynamic turns into a close friendship. Li might want to pay back Bill for his heroism. However, can Li help Bill reunite with Katie Logan (Heather Tom)?

The Bold And The Beautiful Spoilers – Bill Spencer’s Kindness

B&B spoilers reveal that Bill found Li in the back alley behind a restaurant by the water. Even though Li was a stranger to Bill and could have been dangerous, he tried to take care of her anyway. After refusing to go to the hospital, Bill took Li home and called Dr. Jordan Armstrong (Vincent Irizarry) to check her out.

Now that Liam Spencer (Scott Clifton) has stopped by Bill’s house, Li is finally starting to speak and come out of shock. Li told Bill and Liam that Finn is still alive. Of course, the Spencer men don’t believe that Finn is alive. However, they will soon discover that Li isn’t crazy or in denial.

It is teased that Bill will jump into action to save Finn. A photo shows Finn standing up and facing Bill, who appears to have just burst through the door. Even though Sheila Carter (Kimberlin Brown) should be apprehended, that won’t happen. Sheila will find a way to escape as she has a tense interaction while wearing a disguise during the week of August 1.

The Bold And The Beautiful Spoilers – Romance Or Friendship?

The Bold and the Beautiful spoilers reveal that Bill seemed to be drawn to Li despite not initially realizing who she was. Bill kept telling Liam that he “had” to do something good and help her. It seems that Bill realizes his mistakes are what pushed Katie away and he’s trying to balance the scales. Saving Finn will certainly make Bill a hero in everyone’s eyes.

Even though a romance is teased, Bill and Li might not be long-term. Bill and Li could develop a close friendship, though.

Li will probably want to do something to repay Bill for his kindness and heroism. After finding out the situation with Bill and Katie, could Li take action? Will Li be the person who makes Bill’s wish come true? Could Bill and Katie end up reuniting thanks to Li’s intervention?