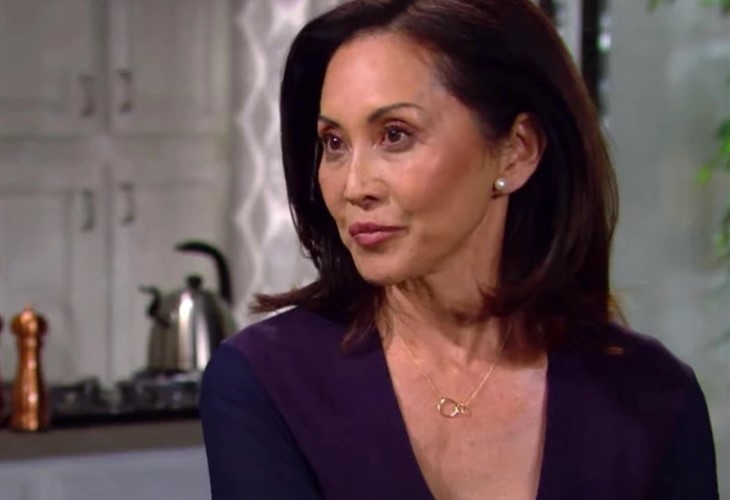 The Bold and the Beautiful spoilers document that Li Finnegan (Naomi Matsuda) refuses to pull the plug. John Finn Finnegan (Tanner Novlan) is believed to have no brain functions and is being kept alive through machines.

Steffy Forrester Finnegan (Jacqueline MacInnes Wood) is Finn’s wife. So, she would have made what would have been a life-support decision about her husband. Li made that calculation and decided that it was her choice instead.

Te Bold And The Beautiful Spoilers – Going Back To Il Giordino

What once was a pleasant outdoor dining spot became the scene of a gruesome murder and additional shooting. Fans know that Sheila Carter (Kimberli Brown) actually shot but did not kill her son and shot Steffy.

Viewers were shown incredibly dramatic scenes, where Finn stepped in front of his wife, took the first bullet Sheila shot, and fell to the ground. Blood quickly stained his shirt, Finn regained consciousness for a moment, offering a handful of words and mentioning Hayes Forrester Finnegan (Samantha Worden and Piper Harriet).

Sheila shot Steffy to prevent her from calling for help. Sheila thought her victims were dead, made the scene look like a robbery gone wrong, and then left. Fans later saw a sheet pulled over Finn’s face, indicating he was dead and carted away from the scene.

Li apparently operated on Finn, removing the bullet that Sheila forced him to take. If not, at the very least, Li stopped the bleeding and stabilized her adopted son.

The idea that she could transport Finn out of the hospital, with attached equipment, and get him safely to the room where she is caring for him is unbelievable. However, this is daytime, so the suspension of disbelief scenario has been employed.

Finn fans are okay with the above scenario because it gives them a chance to see the actor they embrace return to the show. But will Finn regain consciousness?

The Bold And The Beautiful Spoilers – Steffy Forrester Finegan Not Good Enough?

Li told her unconscious son that his link to Steffy brought drama into his life. Fans know that Steffy is not to blame for Sheila being his mother.

So, Li’s transference of her feelings regarding Jack Finnegan’s (Ted King) betrayal has altered reality. Li is unable to think logically, as she should never have signed Finn’s death certificate and should not be caring for him remotely.

Li sees Steffy as a threat. So, it is fair to wonder how Wood’s character will learn the truth on B&B?

Days Of Our Lives Spoilers: Belle Furious, Kicks Shawn To The Curb!