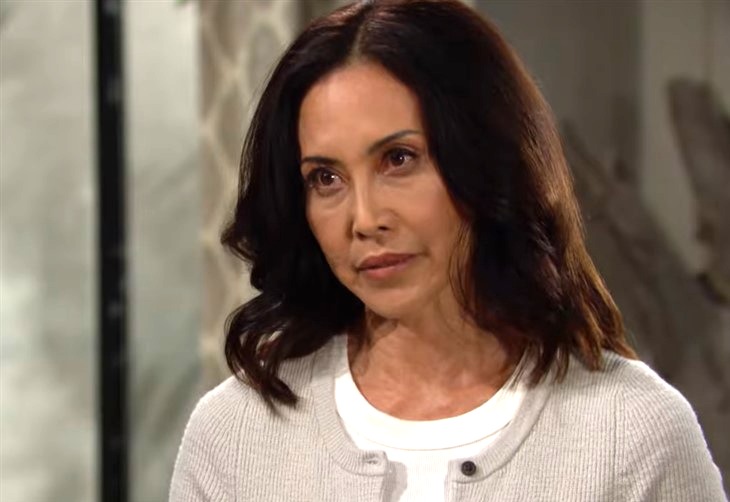 The Bold and the Beautiful (B&B) spoilers for Tuesday, August 9, 2022, reveal Steffy finally confronting Li on why she kept Finn hidden away.

The Bold And The Beautiful Spoilers – What Is Li Finnegan’s Excuse?

In the more than a month since viewers learned that John ‘Finn’ Finnegan (Tanner Novlan) was alive and his mother was keeping him that way, hidden in a hotel room hooked up to machines, she has never explained why she did it. We know Li Finnegan (Naomi Matsuda) believed there was still life in Finn and her doctor skills could nurse him back to health, but why wouldn’t she at least tell his wife?

That’s exactly what Steffy Forrester (Jacqueline MacInnes Wood) wants to know when she demands an explanation from Li. IN her mind, there was no reason to keep Finn from his family for so long. And there was especially no reason to force Steffy to grieve for a husband who was still alive.

What will Li say for herself now that she is finally cornered and confronted with these questions? Will she be apologetic or will she still feel her actions were completely justified?

Now that Ridge Forrester (Thorsten Kaye) and Taylor Hayes (Krista Allen) hayes are back in Los Angeles with their real-world problems and lives, they can’t stop thinking about one another. Ridge may be living with his wife again in her house, but he kissed Taylor when they were in Monte Carlo and that means something to him. He can’t stop thinking about the moment and what he felt. Is it stronger than what he currently feels for Brooke Logan Forrester (Katherine Kelly Lang)?

Taylor also can’t stop thinking of the kiss and keeps flashing back to that romantic moment when she and Ridge got carried away. However, Taylor knows that Ridge has hurt her enough, even this year, and she is not sure she wants to be hurt like that again.

However, she can’t seem to stay away so it looks like a decades-old habit will be as hard to break as always. When will all three of them — Ridge, Taylor, and Brooke — face the fact that everything about this tug-of-war is toxic? Stay tuned to The Bold and the Beautiful weekdays to see how these stories play out.