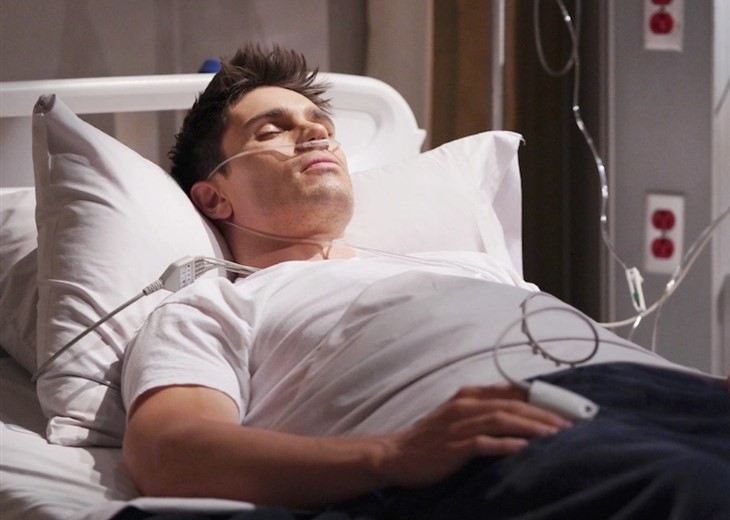 The Bold and the Beautiful (B&B) spoilers reveal that Sheila Carter (Kimberlin Brown) smiled when Li Finnegan (Naomi Matsuda) succumbed to a fiery death. However, Sheila won’t be smiling when she realizes that John “Finn” Finnegan’s (Tanner Novlan) life depends on a real doctor! If Finn flatlines, Sheila will panic. Could Mike Guthrie (Ken Hanes) step in and play hero?

The Bold And The Beautiful Spoilers – Killing Li Finnegan

B&B spoilers reveal that Li snuck a comatose Finn out of the hospital with the intention of saving his life. However, Li had no idea that she might not live long enough to see Finn recover. That is exactly what has happened, though. Once Li crossed Sheila and tried to escape, the escaped inmate chased her down.

Unfortunately, Li crashed her vehicle and the rear end caught on fire. With the back of the car in flames, Li went over the bridge and landed in the water. Sheila smiled as she watched the car sink.

Li didn’t appear to tell anyone about Finn. It is assumed that Jack Finnegan (Ted King) was never told about Finn’s secret survival. So, Jack might look for his missing wife but could be unaware that his son is alive but in grave danger.

It is teased that Sheila will be out of her element. There is word that Finn could flatline shortly after Li’s death. We know that Finn does survive but Sheila will be forced to take drastic action to make sure Finn doesn’t die. This could include getting out paddles to jumpstart Finn’s heart if he suddenly codes.

The Bold And The Beautiful Spoilers – Sheila Carter’s Explanation

The Bold and the Beautiful spoilers reveal that Sheila will have to explain Finn to Mike. Sheila will tell Mike that she shot her biological son, but it was just a terrible accident. Even though Mike takes Sheila’s word for it, he will soon find out the truth.

While Sheila didn’t mean to shoot Finn, she did intend to murder Steffy Forrester Finnegan (Jacqueline MacInnes Wood) on multiple occasions. Sheila gave no thought or care to how Kelly Spencer (Sophia Paras McKinlay) and Hayes Forrester Finnegan (Piper Harriot) would cope growing up without Finn and Steffy.

Carter recently told Soap Opera Digest that Sheila is now responsible for making sure Finn doesn’t die. Even though Sheila used to be a nurse that was many years ago. Plus, Sheila is completely out of her element caring for a comatose patient without any medical records or doctors.

It is teased that Mike will help Sheila take care of Finn. So, if Finn flatlines, will Sheila panic? It might be up to Mike to save Finn’s life but what happens when the patient wakes up? Finn will want to know what happened to Li and Steffy. Finn will also demand answers as to why Sheila is taking care of him.

Of course, Sheila will claim that she saved Finn when he flatlined… even if Mike is the one that played hero. Sheila will hope that her saving Finn might get her some forgiveness. However, she is forgetting one thing… Finn values other people’s lives more than his own. That’s the whole reason he risked his life to save Steffy.