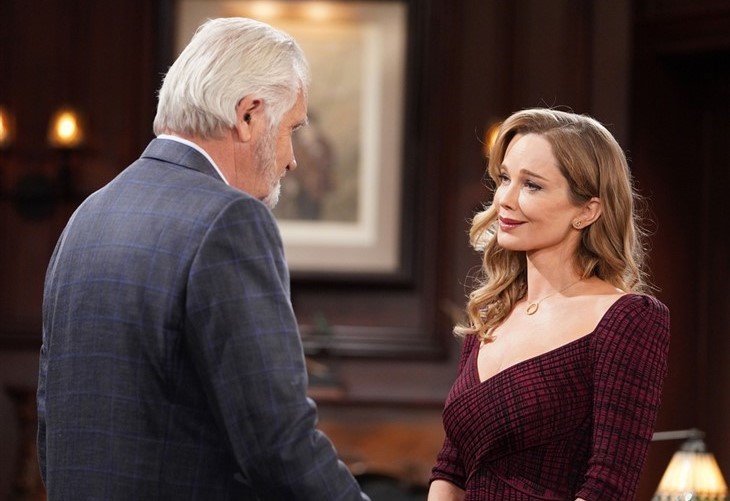 The Bold and the Beautiful (B&B) spoilers reveal that Eric Forrester (John McCook) can’t make up his mind about which woman to be with. Donna Logan (Jennifer Gareis) makes a request, which is probably that Eric stops keeping her a secret. However, if Eric refuses to tell Quinn Forrester (Rena Sofer) the truth, could Donna do it for him?

The Bold And The Beautiful Spoilers – Eric Forrester’s Secret Affair

B&B spoilers reveal that Eric is having an affair with Donna. Even though Eric is always dismissing Quinn while rushing to be with Donna, he doesn’t want to tell the truth. Eric keeps insisting to Donna that Quinn can never find out the truth. However, Eric is eventually going to get caught, especially now that he’s wearing a watch that monitors his heart rate.

During the week of May 30, Donna and Eric talk about the happy memories that they’ve shared over the years. This leads to Donna making an unexpected request of Eric. Donna will probably tell Eric that she doesn’t want to keep their love a secret anymore.

Donna knows that Quinn will probably go after her, but she might not care. So, how will Eric respond if Donna wants him to tell the truth to Quinn?

The Bold And The Beautiful Spoilers – Torn Heart and Indecision

The Bold and the Beautiful spoilers reveal that Eric seems all into Donna right now. However, Eric still isn’t over Quinn and isn’t sure about ending the marriage just yet. Actor John McCook explained to Soap Opera Digest that Eric truly is torn between the women.

Each time he is with Quinn, all he can think about is Donna. Then, when Eric is with Donna, he can’t get Quinn out of his mind. So, it sounds as if Eric might tell Donna that he’s not ready for Quinn to know the truth yet. Another possibility is that Eric agrees to Donna’s request but chickens out when he faces Quinn.

Eventually, Quinn is going to learn the truth. Many fans think that Quinn will learn about the affair through the heart rate monitor watch. While Quinn might question why Eric’s heart rate went up at certain times, the patriarch will probably claim he was playing pickleball.

It’s possible that Donna won’t like Eric keeping her a dirty little secret. Maybe Donna tries to force Eric’s hand by bragging about the affair to Quinn. Eric might understand why Donna tells Quinn herself, but it will still anger him.

After all, Eric is already feeling guilty, and with the truth out, he will be forced to make a snap decision. Will he pick the right woman, though? Will he second-guess his choice? We will have to keep watching to find out.