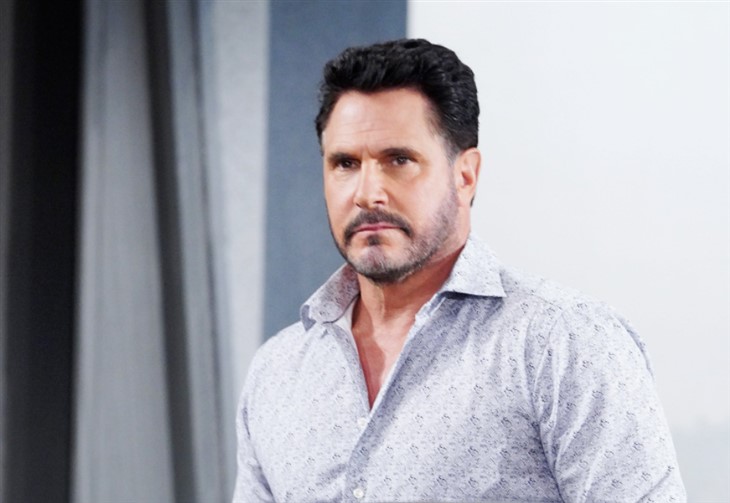 The Bold and the Beautiful (B&B) spoilers for Wednesday, May 18, 2022, reveal Bill getting the scoop on everything that’s been happening in the world of the Logans and Forresters.

It’s a good thing Dollar Bill Spencer (Don Diamont) has a son married into the Logan and Forrester family because that’s how he gets all the dirt and boy does he get an earful on Wednesday. When he visits with Liam Spencer (Scott Clifton) and Hope Logan Spencer (Annika Noelle), he can’t believe what they have to tell him about Brooke Logan Forrester (Katherine Kelly Lang) drinking on New Year’s Eve and why it happened — because Sheila Cater (Kimberlin Brown) switched labels on champagne bottles. This seems to take precedence over the fact that Sheila shot Steffy Forrester (Jacqueline MacInnes Wood) and killed her own son, John ‘Finn’ Finnegan (Tanner Novlan).

But no matter. Bill just can’t believe that Ridge Forrester (Thorsten Kaye) left Brooke over all of this. Does he truly love her if he can dump her for every indiscretion and go running back to Taylor Hayes (Krista Allen), the woman who shot Bill a few years ago because of a misunderstanding. Even Wyatt Spencer (Darin Brooks) is along for this little meeting and he hasn’t been seen in months. In fact, he has zero story whatsoever and only pops up to hear his brother and father’s problems. Wait till he learns what his mother is about to find out.

Meanwhile, Ridge is also in shock. He dumped Brooke because she kissed Deacon Sharpe (Sean Kanan) but she only kissed Deacon because she drank and only drank because Sheila switched the labels. This changes everything. Or does it?

After all, Brooke started by lying about the drinking and then she lied about Deacon, and Sheila didn’t make her do any of those things. Those were her choices when she was sober. She even tried to gaslight Douglas Forrester (Henry Joseph Samiri) into believing he didn’t see Grandma kissing Santa. It was all in his head. So, Brooke isn’t the innocent in all of this and plenty of blame could be laid at her feet. Still, Ridge decides whether he will forgive her or not. Is the bridge no longer broken? Stay tuned to The Bold and the Beautiful weekdays to see how these stories play out.

Days Of Our Lives Spoilers: Lani And Paulina Have A Secret