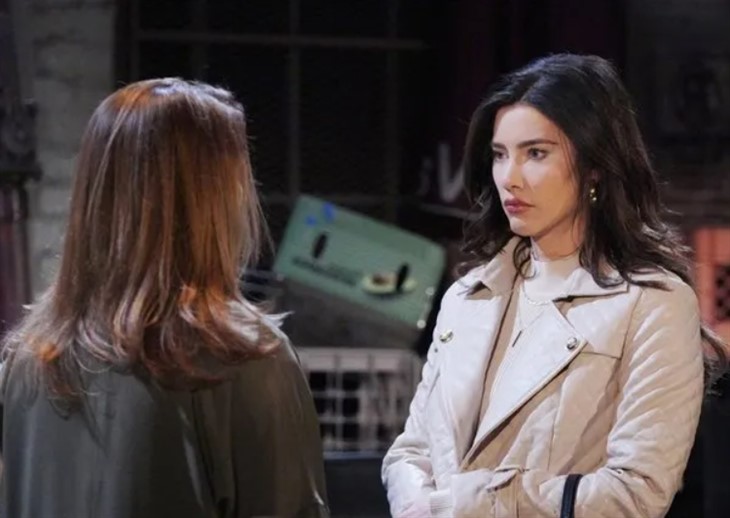 Sheila was attempting to shoot Steffy when Finn came through the alley door and stood in front of his wife. He did not have time to talk his birth mother down as she put herself in a killing state of mind and inadvertently pulled the trigger while Finn stood directly in front of her, just feet away. Moments later, she shot Steffy as well.

Viewers know that Steffy saw Finn heroically defend her. They also know that Steffy’s confrontation with Sheila at the cliff house was intended to gain an admission. But how can Steffy prove Sheila was there if Brown’s character does not admit to being present?

Sheila will confess if TPTB present a quick wrap to what has been a building reveal. That will be an easy way out of this story.

Sheila would soon be convicted and sent to prison for a period that would likely cover her remaining days on this earth. The writing staff may be in the process of making Sheila disappear indefinitely.

Of course, Sheila could always return. This outcome assumes that all goes well from arrest to conviction through to imprisonment in California.

Sheila could be arrested and imprisoned. But a trial could ensue, with Sheila claiming innocence.

This form of story line could be stretched in the summer. As long as there was some evidence, beyond Steffy’s testimony, the state would have a strong case.

The Bold And The Beautiful Spoilers – Might A Judge Rule A Mistral, Setting Sheila Carter Free? Maybe.

Alternatively, Sheila could escape after she is arrested and before an assumed conviction happens.

The subject header outcome is hopefully preposterous. Viewers could assume that Steffy or someone who cared for her or Finn might pursue vigilante justice.

Li Finnegan (Naomi Matsuda) already expressed her intense Sheila detest. But someone who might be more motivated is Jack Finnegan (Ted King).

TPTB could have either one of Finn’s true parents, in every way that mattered, deal with Sheila either while she is in prison, while she is awaiting trial, possibly, on the outside, or if she walks free.