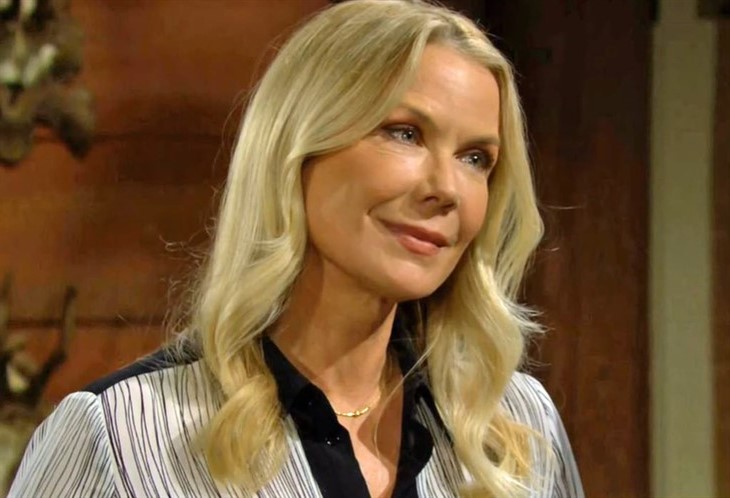 Brooke’s thoughts are like her feelings, all over the place since the start of this year. She woke up and panicked, realizing that Deacon Sharpe (Sean Kanan) was laying in the location where Ridge normally sleeps.

The Bold And The Beautiful Spoilers – Speaking Of Hope Spencer

It was nice to see Hope Spencer (Annika Noelle) with her mother. She brought dinner over to the mansion and had it in the oven. Fans wondered if it was burning while Brooke was dreaming of the loves of her life, but that was not the case.

Hope’s place in the middle of Brooke and Deacon, as their child and main supporter, does not include an apparent hope for her parents to reconcile. Hope is a kind-hearted person. But she is not naive.

Realism dictates something Eric Forrester (John McCook) said to Brooke at the start of the dream. He knows who her destiny is, Ridge.

B&B Spoilers – Deacon Sharpe Not Out Of The Running

Depending upon how long it takes Brooke and Ridge to reconcile, Deacon could realize an opportunity. Kanan’s character and Brooke could further what is a friendship into something more.

Brooke is clearly fond of Deacon and still finds him attractive, as kisses beyond New Year’s Eve demonstrate. But she is not in love with Kanan’s character. He is an ego-pumping diversion.

As viewers noted, Deacon was not part of the great love’s lineup. That was telling but does not necessarily preclude Kanan’s character from remaining an influence in Brooke’s life for the time being.

Sheila Carter (Kimberlin Brown) is key to Brooke breaking from the tortuous trap she finds herself in. Thomas Forrester (Matthew Atkinson) recently forced Sheila to tell him what she did. So, his knowledge of that misdeed can be relayed to Brooke at any time.

But this is daytime. So the script stretch is in effect, with Steffy Forrester Finnegan (Jacqueline MacInnes Wood) anticipated to be enlightened next.

The Forrester siblings want their parents to reunite, which is playing out. So, Brooke appears likely to remain separated from Ridge for the time being on B&B.