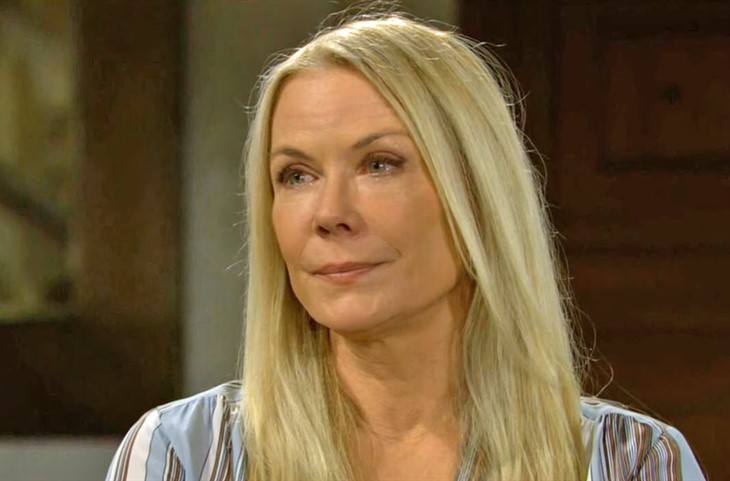 The Bold and the Beautiful (B&B) spoilers for Friday, May 20, 2022, reveal Brooke getting the chance to let loose with her rage.

The Bold and the Beautiful Spoilers: The Face off We’ve Been Waiting For

Yes, Sheila Carter (Kimberlin Brown) killed her own son and then left Steffy Forrester (Jacqueline MacInnes Wood) for dead and tried to gaslight Steffy into thinking it was all her fault, but that is nothing compared to switching the labels on champagne bottles to ensure alcoholic Brooke Logan Forrester (Katherine Kelly Lang) drank the alcoholic version. Not a good thing at all, but at least Brooke is still alive, unlike John ‘Finn’ Finnegan (Tanner Novlan).

Well, Brooke is understandably furious and gets to chance to visit Sheila in jail and tell her exactly what she thinks of her. This is bound to get ulgy because neither woman is very good about keeping their feelings inside. At least Sheila can’t do anything to Brooke now but both women will be left shaken to their cores.

Thomas Forrester (Matthew Aktinson) was trying so hard to be honest and stay on the straight and narrrow, but this grown man also wanted his parents back together and didn’t want to ruin their chance, so he didn’t say anything when he learned what Sheila did with the labels. After all, Brooke getting drunk is what led her to kiss Deacon Sharpe (Sean Kanan) and ensure Ridge Forrester (Thorsten Kaye) would be free to reunite with his mother, Taylor Hayes (Krista Allen).

When Ridge asks Thomas to admit he knew, Thomas comes clean and confirms what Sheila claimed about him. Ridge is furious to say the least, but he is also pretty sympathetic to his son and will likely forgive him with ease. After all, Thomas just wanted to see Mommy and Daddy together again and that’s understandable for a man in his 30s who is already a father himself.

Now, Brooke? She is not going to forgive so easily. She never liked that no-good Thomas and warned her own daughter, Hope Logan Spencer (Annika Noelle), to stay away from him. Now, she believes sh was more right than ever before so Thomas might still pay for what he did. Stay tuned to The Bold and the Beautiful weekdays to see how these stories play out.