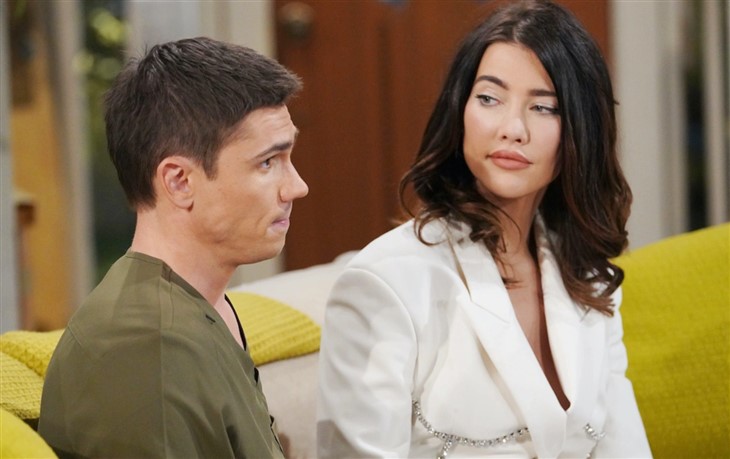 The Bold and the Beautiful (B&B) spoilers for Friday, August 19, 2022, reveal happy couples in Los Angeles. It’s a miracle!

The Bold And The Beautiful Spoilers – Steffy And Finn Grow Closer

Everything seems to be coming up roses for Steffy Forrester (Jacqueline MacInnes Wood) and John ‘Finn’ Finnegan (Tanner Novlan). Miraculously, it looks like he has no lasting effects from a gunshot wound that put him in a coma for months. He and Steffy are together again and happier than ever and they even believe Sheila Carter (Kimberlin Brown) is gone.

This is a time for a celebration, so the pair plans another romantic evening that looks like it will go perfectly. What could get in their way now after so many other obstacles? Perhaps people on soaps should remember they are on soaps and never let their guard down. A certain crazy woman in a red wig might get in the way of all of this. Perhaps Steffy and Finn better check on their children.

It all seems to be going fantastic for Carter Walton (Lawrence Saint-Victor) and Quinn Fuller (Rena Sofer), as well. They no longer have to hide the fact that they are in love. Carter didn’t end up married to Paris Buckingham (Diamond White), which would have been a disaster. And Quinn is out of that marriage to a man who could never just be honest with her and then had an affair behind her back for half a year.

They even both still have their jobs at Forrester Creations so what could be better? Why not celebrate it all with some kisses right in the Forrester offices? Surely, that won’t get awkward or anything like that when someone walks then and sees this very public display of affection.

But will that someone be Eric Forrester (John McCook) or will it be Paris? Perhaps it’s time we see Paris and learn if she is coming to terms with what happened between her and Carter. It’s been a while since we have seen a character who was very unceremoniously left at the altar, but it was also an altar she should have stayed away from. Stay tuned to The Bold and the Beautiful weekdays to see how these stories play out.