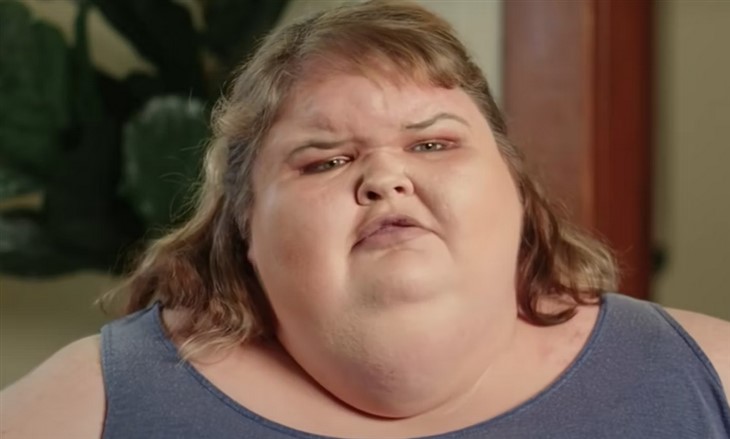 1000-Lb. Sisters spoilers reveal that Tammy Slaton doesn’t often get caught eating during filming for the popular TLC show. As fans know, Slaton is still trying to shed enough weight to qualify for her life-saving gastric surgery. According to Screen Rant, some fans are now wondering if maybe she doesn’t feel comfortable stuffing her face while she’s in front of a camera.

Many 1000-Lb. Sister fans feel Tammy has a hard life. However, a lot of them seem to enjoy watching the reality TV star struggle with the world watching. Life for the TLC personality is a constant battle with her trying to lead a healthy lifestyle while battling constant cravings.

As fans have noted in the past, Tammy’s attitude and temper tantrums have never helped her situation, pushing those who would help her further away. Now, she sits alone in an Ohio rehab facility.

1000-Lb. Sisters Spoilers – Redditors Doubt Tammy Slaton Is ‘Doing the Best She Can’

Over on Reddit recently, 1000-Lb. Sister fans and critics were having a discussion about Tammy, noting how the series often addresses her eating habits yet doesn’t ever actually film her eating. In the thread, started by Redditor “Julianorts,” users pointed out that the reality TV star does eat at an “occasional restaurant” but not on a daily basis.

One commenter noted that they would love to see what Tammy “doing the best [she] can” looks like with regard to her strict diet. According to Jennifer O’Brien, the TLC veteran may simply do like other people with eating disorders do and hide her cheats from loved ones.

1000-Lb. Sisters Spoilers – Is Tammy Slaton Getting Away With Cheating?

Viewers appear to agree that the simple answer to why Tammy is never seen eating is that she eats in secret. We cannot blame viewers for assuming since Tammy has been going to the doctors for many seasons trying to lose weight.

Some viewers remarked that Tammy must feel like she’s getting away with something. However, she probably never considered that people would catch on as she continued to gain weight, especially when her sister went the other way.

Another Redditor posited that the possible reason we never see Tammy eat is that TLC actually plans out blocks of time for filming. Slaton can easily order food on her own or even have it picked up by friends like Jerry.

1000-Lb. Sisters fans are impatient for another season, one, which Tammy has hinted, is already being filmed. Rumors have swirled over the months the show has been off the air that Tammy qualified, and has been scheduled for, her bariatric surgery.

If true, these rumors would mean that Slaton has succeeded in beating her eating challenges but don’t expect to see the TLC personality eating anytime soon – not while the cameras are rolling. Be sure and stay up to date on 1000-Lb. Sisters and return here often for more spoilers, news, and updates.