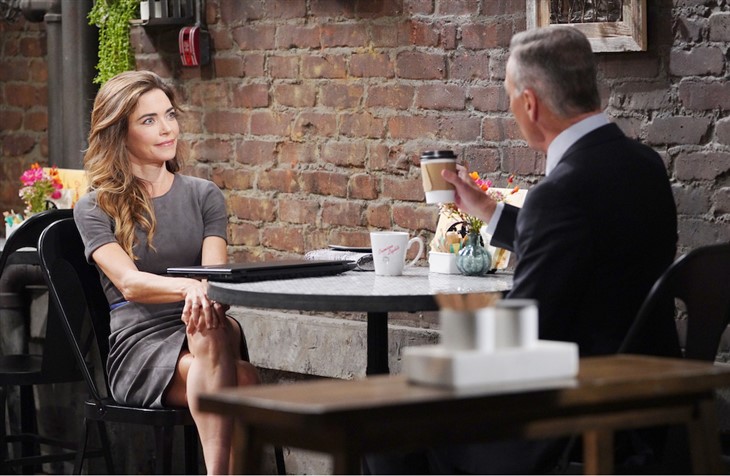 The Young and the Restless spoilers document that Ashland Locke (Richard Burgi) hasn’t finalized the deal that Victoria Newman (Amelia Heinle) invented and is pushing hard to conclude. She believes the potential of this so-called merger will be a major feather in her hat.

Victoria is a peacock and so is Ashland. But Victor Newman (Eric Braeden) presents his feathers like no other living person in Genoa City, Wisconsin. The only person to ever top him was the late, infinitely great Katherine Chancellor (Jeanne Cooper). And while she’s made impressive strides, Victoria doesn’t yet hold a soapy candle to her father or the Grande Dame when it comes to business on The Young and the Restless soap opera.

As Y&R fans recall, Ashland initially came to town to accept in-person bids for one part of his company that he was selling off. Cyaxares was desired by Victor and Adam Newman (Mark Grossman), as acquiring it would jet pack Newman Media’s progress.

Billy Abbott (Jason Thompson) and Lily Winters (Christel Khalil) were in the running for Ashland’s asset as well. Eventually they learned that Victoria was a silent bidder, which didn’t bode well.

Ashland decided to renege on the deal he had with Victor. Then, he played a game with Billy and Victoria, where a coin flip appeared to give her the victory. The Lockeness Monster didn’t follow through on that agreement and found himself fighting for his life while the Moustache coerced him to sign Cyaxares over or potentially die if he didn’t.

Victoria is shrewd like her father. As is true of Victor, her stubbornness often creates blind spots.

So, Victoria has been convinced that Ashland’s romantic fondness for her means that she’s calling the shots. Victoria thinks that he’s been so quickly inclined to turn over his company because of her physical beauty and charismatic charm.

The end of the Locke’s marriage and his seeming terminal condition has clearly left Ashland vulnerable. But is he seeking a similar soul in Victoria or playing off his marital strife and illness in order to score a sweet deal?

The Young And The Restless Spoilers – Victor Newman Wins The Prize?

Ashland is teamed with Victor and Adam. If the head of the Locke Communications Group completes an agreement to merge his company with Newman Enterprises, then he would be teaming with Victor again. Braeden’s alter ego still retains control of the company that Victoria is running.

Fans are right to speculate that Victor’s hands-off approach toward Newman Enterprises will change if Victoria manages to secure the merger. It could be that Ashland is riding a Trojan Horse that isn’t in the stables at the Newman Ranch.