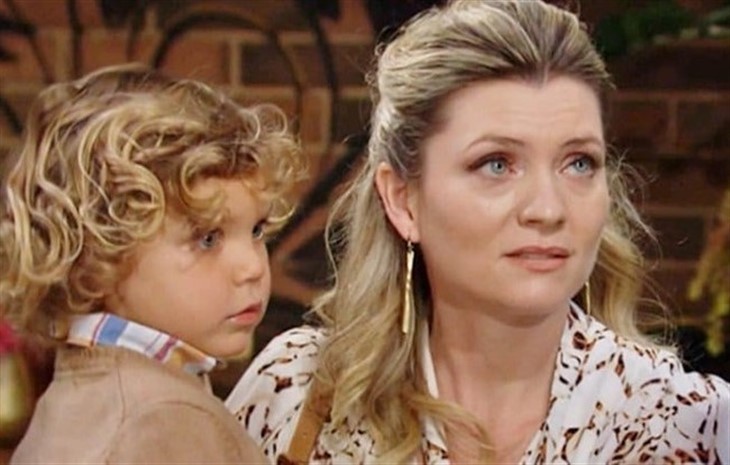 The Young and the Restless spoilers reveal that Tara Locke (Elizabeth Leiner) has nothing left and is out of options. The whole town will learn about Tara and Sally Spectra’s (Courtney Hope) scheme and the Abbotts are done with her. With nothing left, Tara could disappear with Harrison Locke (Kellen Enriquez). How will Kyle and Ashland Locke (Richard Burgi) cope with the loss?

The Young And The Restless  – Tara Locke Out Of Options

Y&R spoilers reveal that Tara is completely depleted and defeated. She has no money, no assets and no job. She does have her shoe line, but she’s in the red across the board. On top of that, she owes massive debt. She has been relying on the generosity of the Abbott family but that’s about to be cut off. She has tried everything, including getting rid of Summer Newman (Hunter King) so she could marry into money again. However, Kyle’s not interested and she’s been exposed.

It’s possible that Tara could run away, just as she always does when the going gets tough. Once Ashland found out about her affair, she ran to Kyle and Jack Abbott (Peter Bergman). Now that the truth is coming out, she will run again and will take Harrison with her.

The Young And The Restless  – Kyle Abbott Has No Parental Rights

The Young and the Restless spoilers reveal that as of right now, Kyle has no parental rights. So, if Tara leaves with Harrison, there is nothing stopping her from going under the radar. It’s quite likely that he will never see Harrison again.

It’s true that Kyle submitted the paternity paperwork to the courts. However, they still haven’t gotten around to it. Until a judge signs off on it, Kyle still has no parental rights.

Ashland is Harrison’s legal father as his name is on the child’s birth certificate. Plus, he has financially supported Harrison since birth and will continue to, according to Ashland and Tara’s divorce decree. More important than that is how much Ashland loves Harrison. Tara might have told her lawyers to get her sole custody, but Ashland does get visitation. So, if Tara doesn’t bring the child to see Ashland on his days, then the law could get involved.

If Harrison disappears without a trace, it would crush Ashland. He would likely put a lot of time, resources and money into finding Harrison. However, Tara is pretty good at staying under the radar and she would make sure that Ashland never sees his son again. There isn’t much in this world that Ashland gets emotional about. However, his son is one of them. If he disappeared, it could destroy Ashland and he might never recover from it.

DOOL Spoilers: Ben Crashes And A Knock On the Head Causes The Old Ciara To Resurface