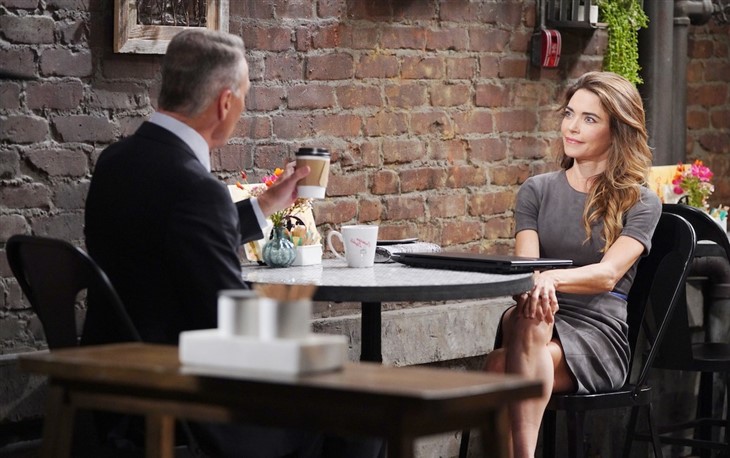 The Young and the Restless spoilers document that Ashland Locke (Richard Burgi) appears influenced by love. His agreement to seek cancer treatment is clearly the result of Victoria Newman’s (Amelia Heinle) explosive rise in importance in his life.

It remains debatable if Ashland is actually ill. Victoria became the first person to hear that news. All the outward signs are there, but the Lockeness Monster’s reputation is so gigantic that viewers are right to still wonder if he is telling the truth.

But would a man lie to the three-year-old boy he considers to be his son, despite the paternity test results?? Well, to be specific, Ashland wasn’t seen using the cancer word with Harrison Locke (Kellen Enriquez). So, there is some wiggle room.

The Young And The Restless Spoilers – Adults Behaving Badly In GC

If Ashland truly has cancer, then Tara and Kyle demonstrated no understanding of his circumstances. Such is the case between two people who did the same nearly four years ago in the Hamptons.

Tyle cared about themselves, not Ashland, back then. They displayed after-the-fact compassion now. While Tara has proven to be the more duplicitous individual, Kyle is no peach when it comes to the man whose marriage he helped to wreck.

Imagine a scenario where Ashland and Victoria are married. Everyone is assuming that she’s setting herself up for horrible heartbreak when his supposedly imminent demise occurs.

But if Ashland is being honest and follows through with treatment, then he could at least add an undetermined amount of time to his lifespan. Along with that he could enter or be pushed into a period of remission that could be indefinite.

Vashland or Ashtoria both work as couple’s nicknames. Either realized mashed moniker will be quite the force if this pair marries shortly. That and their recently announced business merger would establish a truly powerful couple.

The Young And The Restless Spoilers – Truth Needs To Be Confirmed

Victoria is clearly positioned to learn the truth. If Ashland is dying, then she will surely confirm that point at some point. Alternatively, she is in regular proximity to him, which makes a reveal in the opposite direction likely.

Y&R can’t possibly be presenting a storyline where one of its new characters, who has taken a prominent amount of storyline space, is lying to everyone in GC about cancer, right? That would be distasteful soap.

Thinking optimistically on two fronts, Ashland is being honest and he defeats this terrible disease.