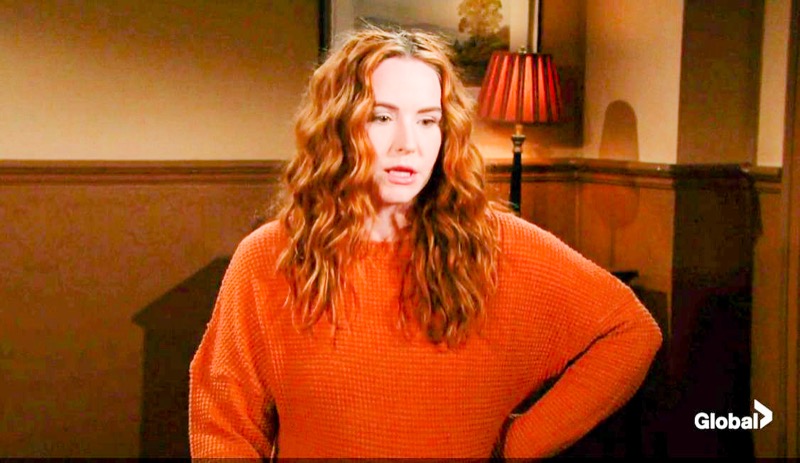 The Young and the Restless (Y&R) spoilers reveal that Mariah Copeland (Camryn Grimes) covered the camera in her hostage room. Her goal was to lure the kidnapper to see why the camera had stopped working. That didn’t happen but this week, Mariah will uncover it and beg her captor for help. Mariah panics as she begins to go into labor as she still has not been rescued.

Y&R spoilers reveal that all of this time, Mariah has been focused on what the kidnapper wants and why she is there. It didn’t occur to her until recently that she is close to her due date and the baby might be the whole reason she’s being held hostage. This becomes Mariah’s new fear, as Grimes told SOD last week.

During the week of August 23, Mariah’s fear will come true. She begins to have contractions but doesn’t know if it’s real labor or Braxton-Hicks. Then, the contractions get stronger and Mariah realizes that she is going into labor. She is in an absolute panic for many reasons, including the safety of her own life as well as the life of Abby Newman-Abbott-Chancellor’s (Melissa Ordway) baby boy.

The Young and Restless spoilers reveal that Mariah will uncover the camera so that her captor knows she is in labor. Even though this is a risk as the kidnapper could be after the baby, Mariah is desperate and scared. Grimes talked about the storyline in this week’s edition of Soap Opera Digest and explained Mariah’s thought process.

“It’s a last plea of, ‘Please do something!’ Giving birth is a scary enough process even if you’re in the hospital with doctors. To imagine doing it alone would be absolutely terrifying because you know it’s going to be the worst pain you’ll experience in your life. That’s a universal truth, so that causes a lot of distress for Mariah.”

The Young And The Restless Spoilers: Challenges Teased

We know that Mariah does get saved but whether it happens before she delivers the baby or after remains unknown. There is a possibility that the rescue comes after Mariah also has the child. Grimes previously teased that Mariah will have to be strong enough to face the challenges ahead.

What do you think of Mariah’s kidnapping storyline? Do you believe that she will be saved before the baby arrives? Or will Mariah’s rescue not come until after she already delivers Abby’s baby? We will have to keep watching the CBS soap to find out.