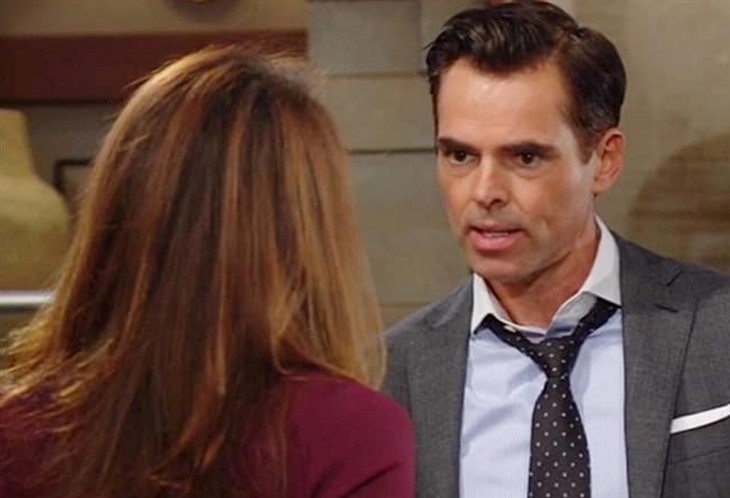 The Young and the Restless spoilers tease Lily and Billy are in trouble.  The duo forged ahead with their plan to work with Jesse Gaines and it’s about to blow up in their faces. This may be the end of ChancComm and their relationship.

The Young And The Restless Spoilers – Pay Day Is Here

Spoilers for Y&R indicate that Friday will be payday for Billy Abbott (Jason Patrick) and Lily Winters Ashby( Christel Khalil). No details have been given on what will happen to the pair but all indications are that it will rock them to the core. Jesse Gaines (Jamison Jones) showed up on their doorstep claiming to be hiding from Victor Newman (Eric Braeden) when he is actually working as his pawn. Victor, Ashland Locke (Richard Burgi) and Adam Newman (Mark Grossman) have come up with a plan that will destroy Billy and ChancComm.

Whatever takes place will affect Lily who is basically collateral damage. Her crime is getting mixed up with Billy when there were so many warnings. Last week Adam offered her a job at Newman Media after ChancComm is destroyed but she declined. Lily knows that Victor takes no prisoners and that when he strikes it will be brutal but she has never before been on the receiving end of his wrath.

The Young And The Restless Spoilers – Billy Abbott Never Changes

Billy has gone up against Victor before and always comes out on the losing side. He once ended up in a foreign prison because the Newman patriarch wanted to keep him away from his daughter. Victoria Newman (Amelia Heinle) usually goes to bat for the father of her children but this time she is on board with her father.

According to The Young and the Restless spoilers and recaps, Billy was warned to stop coming after Ashland but he would not listen. When Lily asked Vicki to stop her dad and Adam she declined. No matter how much Billy gets knocked down he keeps trying to get the best of his former father in law and this will never change.

Jill Abbott Atkinson (Jess Walton) will soon return to Genoa City and spoilers tease that she may fire her son and allow Lily to run the company alone. Until then, Billy will once again pay for his actions and Lily will go down with him. Viewers are wondering what Victor has planned and if spoilers are correct, on Friday they may find out.

Days Of Our Lives Spoilers: Lani Learns The Truth About Her Parentage