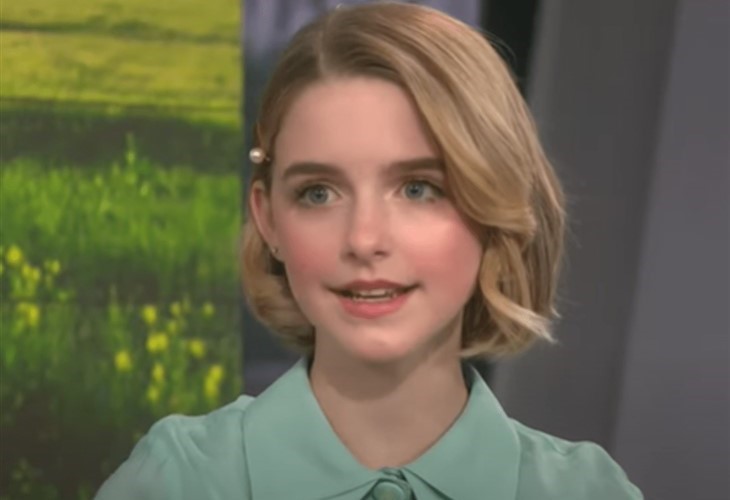 The Young And The Restless alum Mckenna Grace just shared exciting news about her career. And the 15-year-old actress’ update revolves around one of her previous film roles, in which she portrayed Emma in “The Bad Seed.”

Learn what the Young And The Restless alum just revealed about “The Bad Seed” sequel. Plus: Find out everything to know about Lifetime TV’s upcoming film below!

Mckenna Grace, who previously portrayed Faith Newman on The Young And the Restless, has a long and impressive list of acting credits in addition to her soap opera role. For instance, Mckenna  starred in “Ghostbusters: Afterlife” and “Gifted.” But it’s Grace’s starring role in “The Bad Seed” with Rob Lowe that’s currently earning her the spotlight.

Ever since Lifetime aired “The Bad Seed” in 2018, fans have hoped for a sequel. And now the actress herself has provided it! Mckenna proudly announced that she collaborated on a sequel to the popular Lifetime movie. She tweeted out one of the many articles about the announcement.

Mckenna Grace To Headline & EP ‘The Bad Seed’ Sequel Greenlighted By Lifetime Which She Co-Wrote https://t.co/z5DWmBaKok

Grace and her father Ross Burge collaborated together on “The Bad Seed” sequel along with Barbara Marshall. And the producer credits also will turn into a family affair. Mckenna will co-produce with her father Ross and mother Crystal Burge. In addition, Mark Wolper will assist in producing the new Lifetime movie, set for a premiere in 2022.

“The Bad Seed” sequel project earned the green light from Lifetime TV for its visionary plot, revealed the network. “When Mckenna came to us with a spec script she wrote, we were blown away with her vision for the next installment and thrilled we could greenlight it and reteam with her and Mark Wolper,” stated Tanya Lopez, EVP, Scripted Content at Lifetime. “This is an incredible Broader Focus moment to have such in a talented young star stretch her abilities beyond acting into writing and executive producing.”

The plot for “The Bad Seed” sequel will focus on Emma, 15. Currently going to high school and living with her Aunt Angela, Emma gets scrutinized by her aunt’s husband. He feels concerned that something is wrong, and urges that his wife send her off to boarding school. But Emma starts to live up again to that “bad seed” title, determined to do away with anyone she sees as her enemy.

The Wolper Organization and Front Street Productions will produce “The Bad Seed” sequel for Lifetime, with Mark Wolper serving as executive producer. Louise Archambault will helm the direction of the script. The project is scheduled to film in Vancouver.