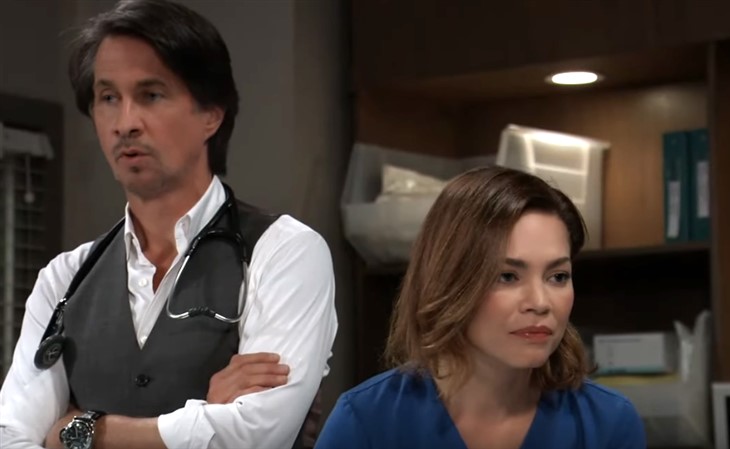 General Hospital shocked fans (and also appalled many of them) when it chose to kill of Franco Baldwin (Roger Howarth), one half of the popular pair known in social media circles as ‘Friz’. Elizabeth (Rebecca Herbst) was devastated when her husband died but we never even got to see much of her devastation. We barely even saw a memorial for Franco. All we have seen is Elizabeth supporting everyone else and nobody supporting her.

It’s quite clear that GH wants to pair Elizabeth with Finn (Michael Easton). She’s a lonely widow and a nurse. He just broke up with Anna after she broke his heart and is a doctor. They work together at General Hospital every day and are now bonding over the fact that they hid Peter’s allegedly dead body in a freezer in the GH basement.

Elizabeth was also a one-woman support system for Finn when he was trying to find a cure for Chase and save his life. When Finn reached out to affectionately touch her face, Liz was understandably taken aback. After all, her husband’s body is barely cold and she is not ready for anything like this at the moment.

If you forget the fact that Finn should still be getting over losing Anna (Finola Hughes) and Elizabeth should still be mourning her husband, things come down to the fact that Elizabeth and Finn just don’t have any chemistry together. Everything between them seems forced and out of nowhere. The most interaction they have ever had in the past was regarding Hayden (Rebecca Budig) or Violet (Jophielle Love). You never even saw a deep friendship develop between the two characters.

Right now everything between them feels like a setup for Hayden to return and find her sister and the love of her life are now in a relationship — but a relationship that doesn’t come from character and instead feels like nothing but a plot device. This is nothing against the actors who play Elizabeth and Finn. Rebecca Herbst and Michael Easton are giving this story all they have. They just don’t have the right story and character motivation to work with. Stay tuned to General Hospital weekdays to see if Hayden really does return to liven things up. Keep checking back here for more General Hospital spoilers, news, and updates

Days Of Our Lives (DOOL) Spoilers: Chloe Is Torn Between Philip And Brady