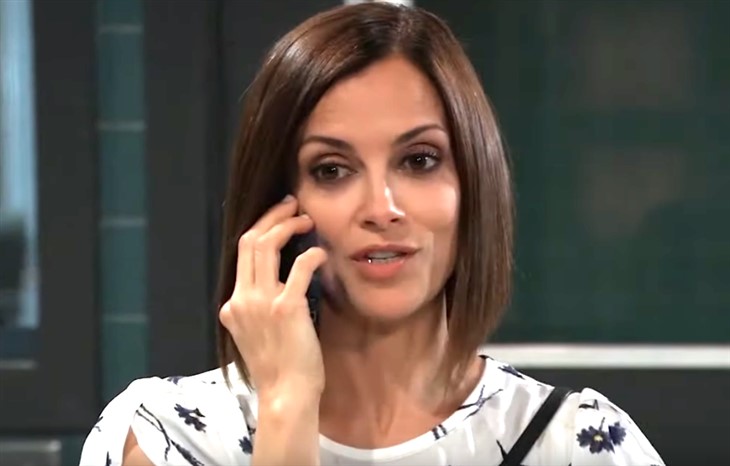 General Hospital (GH) spoilers reveal that Nikolas Cassadine (Marcus Coloma) and Ava Jerome Cassadine (Maura West) are on ice after being hounded by a mysterious and scary stalker. Someone is yanking their chain, but who? These two have more enemies than a tomcat has fleas so understandably they have no clue who is harassing them.

The mysterious scheme is working for now, as Ava has flung Nik to the curb like a dirty rag. She simply can’t endanger her daughter Avery (Ava and Grace Scarola).

But explosive show spoilers reveal that an unholy alliance may have formed to take them down. Could it be that Hayden Barnes (Rebecca Budig) and Spencer Cassadine (Nicolas Bechtel) are conspiring to put an end to Nava? They both have reasons to see the partnership end, and both are ruthless and smart.

For starters, Spencer is still smarting over his dad letting him believe he was dead. Who does that actually—Spencer has a good reason to be mad!

But does that mean he has a right to gaslight his dad?

A recast Spencer is being talked about and this could mean he has a juicy stalker storyline to pick up. But would Spencer have been able to accomplish all of this on his own?

Hayden has a good reason for getting Ava out of the picture if she still has the hots for the dark prince. It makes sense that Hayden would be behind the torment since she is a low down scoundrel with a past as a dirty player.

Then again, Hayden may want revenge since Nikolas lied about the danger Hayden was facing in order to get her out of town. This means she is missing her daughter Violet Finn (Jophielle Love) who she must be desperate to see.

Adding to the speculation about Hayden and Spencer teaming up, there have been some hints about Hayden, and you know what they say, where there’s smoke there’s fire!

We’ve been seeing a lot of Shawn Butler (Sean Blakemore) lately and he’s in jail wrongly because of Hayden. If Shawn sticks around he’s have to be sprung from jail, and for that Hayden may need to appear to absolve him. Tell us what you think happens next GH fans!

The Bold And The Beautiful (B&B) Spoilers: Zoe Wronged by Paris Too – Cheating Silence Betrayed Sister