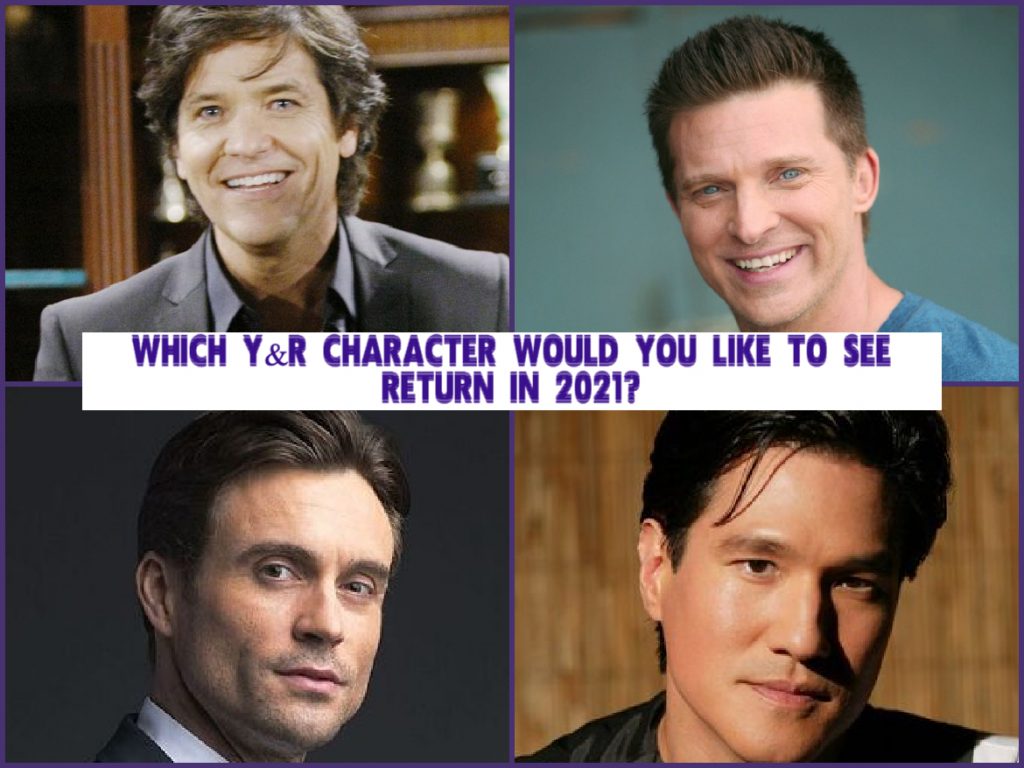 The Young and The Restless spoilers and updates reveal we want to know which Geneo City, Wisconsin character would you like to see return in 2021? Please tell us which one of these you would like to see return by voting in the poll!

Danny Romalotti (Michael Damian) was Phyllis Summers’ (Michelle Stafford) first love and first husband, but before Phyllis he was married to Christine “Cricket” Blair Williams, (Lauralee Bell) and Traci Abbott (Beth Maitland). Danny was a touring rock star beginning his music career while still a teenager, and that is how Phyllis first glommed onto him as a groupie!

Danny and Cricket were still married at the time and Phyllis tricked him into marriage by claiming the baby she was carrying was his. Chris and Paul Williams, (Doug Davidson) who she later married convinced Danny to get a paternity test on little Daniel Romalotti (Michael Graziadei) and found he wasn’t the father, but adopted him anyway. He and Phyllis were married twice. He eventually left town with little Daniel and now lives in California. If he were to return, he could possibly rekindle something with Traci, or stir up trouble between Nick Newman (Joshua Morrow) and Phyllis!

Cane Ashby (Daniel Goddard) left The Young and The Restless canvas a bit over a year ago, hot on the trail of his con man father Colin Atkinson (Tristan Rogers)! He swore that he would go to his grave getting justice for Devon Hamilton (Bryton James) over the scam Colin pulled trying to steal Devon’s inheritance out from under him! However, the storyline was completed minus Cane, who seemed to disappear into nowhere after Katherine Chancellor’s (Jeanne Cooper) will was proven not to have disinherited Devon.

Cane has two children with Lily Winters (Christel Khalil) who returned to The Young and The Restless recently, and nothing has been said about Atkinson’s current status. Chance Chancellor (Donny Boaz) was also tracking Atkinson, but nothing was said about Cane and now he’s left the FBI and married Abby Newman (Melissa Ordway). Cane didn’t show up for the wedding either, if he was even invited. It would be nice to see Cane come back to Genoa City if for nothing else but to complete his apparently dropped storyline!

Keemo Volien Abbott (Philip Moon) is the forgotten Abbott! He is the oldest son of Jack Abbott (Peter Bergman) with Luan Voilen Abbott (Elizabeth Sung). Jack had a fling with Luan while in Vietnam and didn’t know he had a son with her until she moved to Genoa City where she ran a restaurant. Unfortunately, she was shot in a robbery and feared she would die. She asked her good friend Christine Blair (Lauralee Bell) to find Keemo before she died. Chris and Paul Williams (Doug Davidson) travelled to Vietnam and found Keemo and brought him back to Genoa City.

Luan did not die, and she and Jack reconciled and married. Jack had an uneasy relationship with his son and his half-sister Mai Volien (Marianne Rees). Unfortunately, Luan developed a terminal illness which she kept from her family but Jack found out; but didn’t tell Keemo and Mai. After she died, Keemo and Mai were bitter with Jack for robbing time they could have had with their mother and moved back to Vietnam. Keemo too, should have been included in Dina Mergeron’s (Marla Adams) estate inheritance. He is her grandson as much as Kyle Abbott (Michael Mealor)!

Dylan McAvoy (Steve Burton) is the son of Nikki Newman (Melody Thomas Scott) and Paul Williams (Doug Davidson). While the actor is tied up on a different soap on another network at the time, he could easily be recast. Dylan’s last appearance was in 2017 when Dylan left town and went into witness protection. He didn’t come to town looking for his birth parents although he had been adopted, he came to town looking for a woman he had been involved with, Avery Bailey Clark (Jessica Collins) who happens to be Phyllis Summers’ (Michelle Stafford) younger sister. He had been presumed dead, killed in Afghanistan and Avery went on with her life.

Obviously, he didn’t die and the soldier who did was misidentified as him. He took a job bartending offered to him by Nick Newman (Joshua Morrow) and Avery wandered into the bar, blindsided at seeing him alive! In the meantime, she had moved on with Nick! During the time he was in town, he married first Chelsea Lawson (Melissa Claire Egan) and then Sharon Newman (Sharon Case). Chelsea was estranged from Adam Newman (Mark Grossman) and when Connor Newman (Judah Mackey) was born, he was thought to be Dylan’s. However, when Connor’s genetic disorder, retinitis pigmentosa was discovered, the truth came out that Adam was his father. They divorced and not long afterward he marries Sharon.

He discovered he was the biological child of Nikki and Paul when Nikki breaks up a fight between him and Nick, and then Paul needs a liver transplant after being shot and Dylan is a match! Dylan went into police work after discovering his birth father was Paul, and had gone on an out of town assignment involving mobsters. He fatally shot a man in self-defense who was the crime lord’s bodyguard, which led to him leaving town and going into witness protection. Genoa City could use more than two cops and Dylan’s return could spark more airtime for Doug Davidson who many viewers would like to see more often!