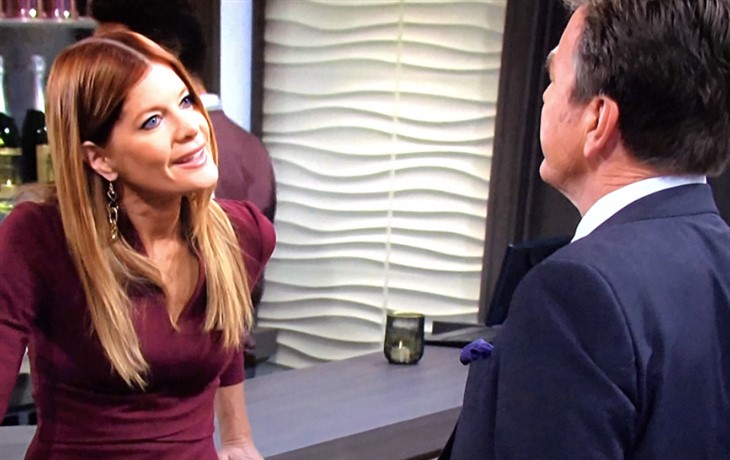 The Young And The Restless Spoilers And Rumors – Nosy Phyllis Summers Senses Danger From Any Woman Jack Abbott Is With!

Viewers of The Young and The Restless may have noticed that Phyllis senses danger for Jack from any woman she sees him with! For instance, she drops by Crimson Lights where Sally Spectra (Courtney Love) is having a cup of coffee with him and telling him how well her new job at JVC is going. Viewers of The Young and The Restless will recall that Phyllis and Jack were married at one time, around the time when she was pregnant with Summer Newman (Hunter King).

Jack delivered Summer when he and Phyllis were stuck in an elevator, but even though that ship sailed long ago, Phyllis still seems to be someone protective over him when it comes to women! Phyllis just invites herself to plop down at the table where Jack and Sally are talking and interrupts their conversation.

Y&R spoilers tease Phyllis wants to know what is going on. Sally tells her that she took Summer’s job at JVC, which undoubtedly feels like a jab to Phyllis’ heart. Sally mentions that Summer had given Lauren Fenmore Baldwin (Tracey E. Bregman) a recommendation that Sally would get her job. Phyllis frowns and doubts it.

Jack takes Phyllis aside and tells her to cool it. Sharon Rosales (Sharon Case) listens to their conversation with interest when Jack tells her to pour a drink for Phyllis on his tab. Sharon interjects that Phyllis probably shouldn’t go there with Sally but Phyllis thinks Sally has a trap set for Jack and wants to keep him from falling into it. Sharon doesn’t have a problem with Phyllis’ motives, only her methods.

According to The Young and the Restless spoilers, Phyllis then runs back to Jack after Sally leaves. She wants to know how the Abbotts are doing after Billy Abbott’s (Jason Thompson) exposé about Ashland Locke (Richard Burgi) hit the fan.

Viewers of The Young and The Restless will recall that Billy’s article was about Ashland Locke’s cancer. Jack tells Phyllis they are doing all right. She asks him to dinner but then breaks down crying. Phyllis cannot help but think that Summer would still be in Genoa City if it weren’t for Tara Locke and her son moving to Genoa City and she knows that Tara and Harrison Locke (Kellen Enriquez) are living at the Abbott home.

Phyllis apologizes but Nick Newman (Joshua Morrow) went to Italy with Summer and now she feels all alone, and nobody can cheer her up better than Jack. Jack takes her up on her offer but cautions her that if she brings Sally up, she’s paying! Phyllis agrees – and then starts talking about her suspicions regarding Tara.

Phyllis says she senses danger from Tara – and not only for Kyle Abbott (Michael Mealor) but for Jack! She doesn’t want Jack to be blind to Tara’s possible manipulations, knowing that Jack has a kind heart and often falls for a female sob story. Jack frowns a little and assures Phyllis that he’s a big boy and can take care of himself!

The Young and The Restless fans know that Phyllis is right – Jack does often fall for female sob stories and then tries to rescue the sobbing females! Phyllis wants to know if Traci Abbott (Beth Maitland) or Ashley Abbott (Eileen Davidson) know about the situation with Tara and if they have met her. Jack says no, not yet, but a family meeting is in the works.