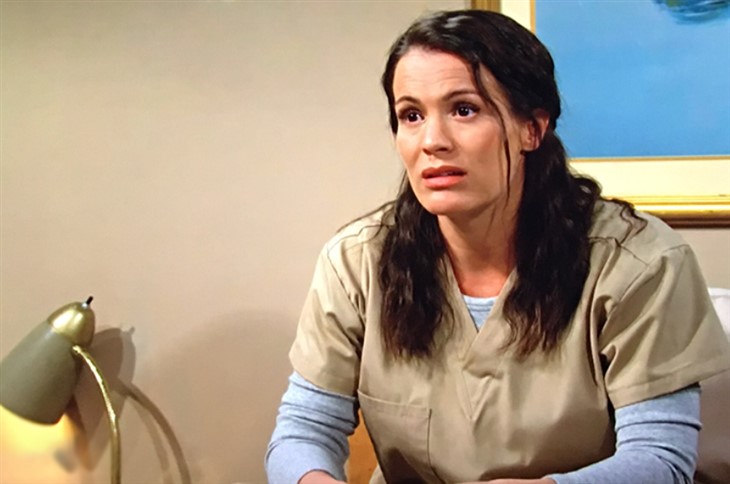 The Young and the Restless (Y&R) spoilers for Friday, July 9, 2021, reveal in Genoa City, Wisconsin Chelsea doing anything to get what she wants.

Chloe (Elizabeth Hendrickson) was shocked to find Chelsea (Melissa Claire Egan) out of the mental institution and at the park, but at least she was supervised. What Chloe didn’t know was that Michael (Christian J. Le Blanc) followed her to the park, but will he get the information he needs?

Of course, Chloe and Chelsea will talk about everything they did during the Rey (Jordi Vilasuso) poisoning incident, but Chelsea wants more. She wants Chloe to deliver Adam to her because use she needs Adama’s (Mark Grossman) help and believes he is the only one who can get her out of the hospital and see Connor (Judah Mackey) on a permanent basis. That little visit Adam allowed her for just a few minutes wasn’t enough.

Will Chloe go along with what her BFF wants this time or will she just say no? And no matter what she does, will all her lies now catch up to her and what will Michael — who is her brother-in-law — do about it?

Y&R Spoilers – The Abbotts Are Way Too Trusting

The Young and the Restless spoilers say that the Abbotts offer a warm welcome. Does that mean Tara (Elizabeth Leiner) and Harrison are officially moving in? We are sure Tara is just thrilled with that idea, but Summer (Hunter King) sure wouldn’t be. While Kyle (Michael Mealor) is being snowed by Tara, Summer is off in Italy saying a sad goodbye to Nick (Joshua Morrow), despite the fact that she never wanted to really leave Genoa City to begin with. Nick is pretty broken up too so we might need to break out the Kleenex for this.

What might happen in the Abbott house with a clearly unstable and manipulative woman living there with a child who might or might not be Kyle’s? Will anyone catch on to her game? Do we need Traci (Beth Maitland) and Ashley (Eileen Davidson) around to knock some sense into their brother? Stay tuned to The Young and the Restless weekdays to see how these stories play out.