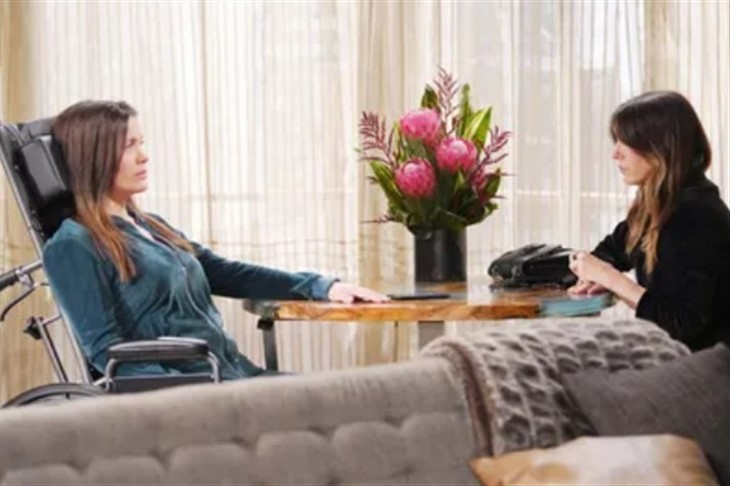 The Young and the Restless (Y&R) spoilers document that in Genoa City, Wisconsin Chloe Mitchell (Elizabeth Hendrickson) now knows Chelsea Lawson (Melissa Claire Egan) is in trouble. Adam Newman (Mark Grossman) is the source of the problem, as usual.

The performances Egan has been offering for weeks are beautifully brilliant, in that she was solely expressing emotions through use of her eyes. Now, as Chelsea has begun to regain limited use of her left hand, she’s also gained a needed ally in Chloe.

Both ladies will need to carefully deal with Adam, who remains the snake he’s been since the reverse SORAS (soap opera rapid aging syndrome) took place when Grossman became the recast for this iconic Y&R role.

The fact that Chelsea was able to reach the cell phone was a watershed moment in her ongoing recovery efforts. That also implies a full physical revival is approaching in the generally near future.

The incredible photo of Shadam kissing at Society, which was widely shared through the internet, caused Rey Rosales (Jordi Vilasuso) to confront Adam at the penthouse. Chelsea was present, which Rey discounted.

The traumatic effect that visit had on Chelsea was at least partially balanced by Chloe’s visit the next day. As for Adam, guilt is driving the latest manipulative response to the trouble he created.

Chelsea wasn’t exaggerating when she was daydreaming about Adam and Sharon becoming involved. It appeared as though she was, but her instincts proved all doubters wrong.

Now, with Chloe’s awareness and involvement, Chelsea will have the ability to form a secret plant to extricate herself from Adam’s lair. Yes, he is similar to a beast who keeps the objects of his interest cornered, or captured.

However, Chelsea has such a strong will that she’s forcing herself to recover. Her mind is strong, which will enable ongoing communication with Chloe, as they develop an exit strategy.

The Young And The Restless Spoilers – Who Is Really In Danger?

Adam put Chelsea’s life in danger when he had her kidnapped, which directly led to her stroke. That led to her current, mostly incapacitated state and the inability to communicate verbally.

But the combination of Chelsea and Chloe, along with Kevin Fisher’s (Greg Rikaart) assistance, may serve to put Adam in danger. His arrogant over-confidence will likely create a feeling of invincibility, with him underestimating the zeal of his enemies to defeat him.

But Chelsea is fiercely determined to reply to Adam’s latest betrayal and to defend her son as well.