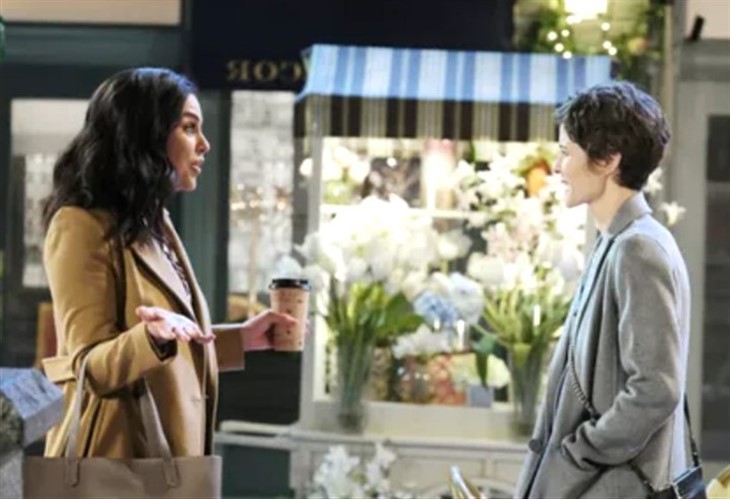 Days of Our Lives (DOOL) spoilers reveal that in Salem Sarah Horton (Linsey Godfrey) figures out Kristen DiMera’s (Stacy Haiduk) secret. She could lure the doctor into a trap and lock her up so she can continue with her plan. However, Sarah going missing right before her wedding will create too much suspicion. Could Kristen fabricate a runaway bride story to cover up her crime?

DOOL spoilers reveal that Chloe Lane (Nadia Bjorlin) recently shared some information with Sarah. She didn’t realize it at the time, but this might end up helping solve a mystery later on. Chloe shared her experiences taking care of Brady Black (Eric Martsolf) with Susan hanging around. She mentioned that Susan is always hovering over them and getting in between them physically. She told the story about the flying muffin and said it almost seems as if Susan is jealous.

During the week of March 8, it is teased that Sarah will make a shocking discovery. We have to assume that she finds out that Kristen is pretending to be Susan Banks (also played by Haiduk). Kristen isn’t going back to prison now that she’s been able to experience a bit of freedom. She also has no intention of leaving Chloe and Brady together. She will do whatever is necessary to keep the charade going. As viewers know, Kristen is the queen of extreme schemes.

Days of Our Lives spoilers state that Xander Kiriakis (Paul Telfer) will get a bad feeling when he can’t find Sarah anywhere. Their wedding is coming up, which makes Sarah’s disappearance even more strange. By the time March 15 rolls around, Sarah will still be missing. Too many people are asking questions and searching for the doctor. So, we expect that Kristen will come up with Sarah’s reason for leaving. Except it won’t be sent by the real Sarah, but Kristen. What could possibly explain her leaving Xander right before the wedding day?

By this time, Xander’s bachelor party will have come and gone. But Rex Brady (Kyle Lowder) crashed the wild party — which only had Xander and Jack Deveraux (Matthew Ashford) in attendance. It is teased that Rex ruins the bachelor party by bringing up the baby swap. We also know that in a promo clip, Xander’s zipper gets stuck and a maid is helping him with it. However, it looks like something else when Sarah walks in. Kristen learns this information somehow. Perhaps Sarah tells Chloe, who shares it with Brady, and Kristen overhears it. Rex bringing up the baby swap, as well as the zipper malfunction could be “reasons” Sarah can’t marry Xander. Sarah’s “excuse” might sound believable to a stranger or acquaintance. However, Xander will know the note isn’t from Sarah.

As he continues to search for Sarah, Kristen will get stressed. She always snaps when she’s like that and she might forget to use her “Susan” voice. If that happens around Brady, the jig is up for her. However, will she tell authorities where she stashed Sarah? We will have to keep watching the NBC soap to find out.

Royal Family News: Meghan Markle Blames Queen Elizabeth For Her Having To do a Tell-All

Days Of Our Lives (DOOL) Spoilers: Belle Arrested, But It Might Not Be For Charlie’s…