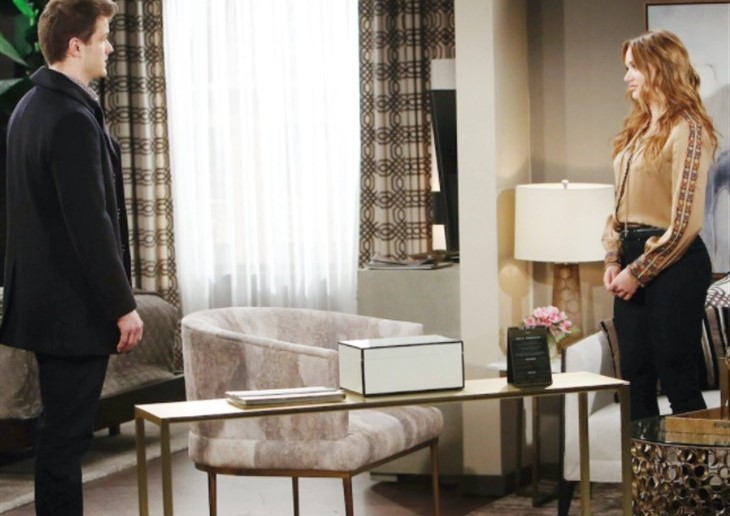 The Young and the Restless (Y&R) spoilers document that in Genoa City, Wisconsin Kyle Abbott (Michael Mealor) and Summer Newman (Hunter King) have matured greatly within the last year. Now, they need to focus on themselves and not be overly distracted by issues involving Sally Spectra (Courtney Hope) and Billy Abbott (Jason Thompson).

It’s true that Sally might become a threat at Jabot in the future. But Summer can’t allow herself to be distracted and Kyle shouldn’t allow his head to ever be turned by the crossover character that Hope now portrays on Y&R.

As for Billy, he’s focused on Lily Winters (Christel Khalil). That positive pairing should ward Kyle off of provoking his uncle for any reason.

Summer is entrenched in Genoa City, Wisconsin. Her family ties alone give her the type of support that Sally will likely never be able to have, no matter how long she chooses to stay in town.

But it is reasonable for Summer to think that Sally could disrupt her career plans. Sally openly stated that she wants the Jabot Collective position that Lauren Fenmore (Tracey Bregman) recently offered to Summer.

Summer’s acceptance of that top spot was followed by Sally’s nasty comments about King’s character not having earned her way in life. Sally’s later revision of her statement didn’t smooth things over and served to provoke Skyle’s trip to California.

The Young And The Restless Spoilers: Plane Ride From Hell Makes Billy Confess He Slept With Summer To Lily

Wyatt Spencer (Darin Brooks) crossed over to Y&R through a brief outdoor shot. But King and Mealor will be appearing on The Bold and the Beautiful during the next week-plus.

Summer’s desire to speak to Wyatt is specific. The front is that she and Kyle wish to talk Jabot business with the Eye on Fashion head. The true reason Skyle wants to chat up Wyatt is to discuss what he knows about his two-time ex-girlfriend, Sally.

Wyatt’s true love of his life, Flo Fulton (Katrina Bowden), should prove to be the best source of personal information where Sally is concerned. And, Bill Spencer (Don Diamont) also has some juicy tales to share with Skyle, if he wants to.

If Kyle is smart he’ll avoid entering into any type of conflict with Billy. The connection between Summer and Billy was discussed, but is a few years in the distance at this point and isn’t a factor in Skyle’s current relationship.

Summer was surprised at how direct Billy was, when speaking about their very brief connection. It was wise to pass that along to Kyle, in order to allay any fears he might have about his uncle being a source of modern day trouble.

The Bold And The Beautiful (B&B) Spoilers Next Week: Hope Notices Thomas Is Now Selfless, Grateful For His Support