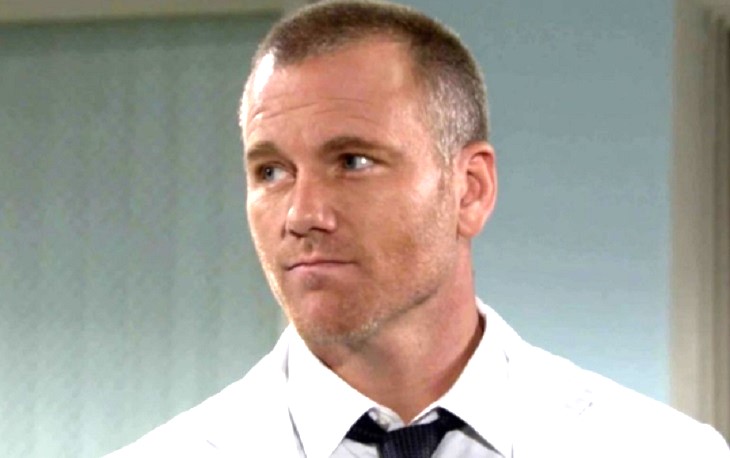 The Young and the Restless (Y&R) spoilers for the week of July 26, 2021 bring with it a mysterious casting change and news of a switch up in the horizon. The change involves a character who could be a good guy or a bad guy ,but fans and apparently TPTB haven’t yet decided! Is on the level or is he far from plumb and square?

Another soapy CBS crossover is on the horizon when John McCook, who portrays The Bold and the Beautiful’s Eric Forrester, shows his face in Genoa City. Let’s just say for now that he will be seen in early August and we’ll have more details as the date nears.

When Sean Carrigan reprised his role as Abby Newman’s (Melissa Ordway) ex Ben “Stitch” Rayburn it was announced he would be seen temporarily. Have things changed? Now fans learned that Suture has taken a job in Genoa City and for that he needs a place to crash.

He asked Abby to help him scout apartments and unless this is all a ruse or a red herring, he could be sticking around. Carrigan popped up on Friday, June 25 and was previously on from 2013 to 2017.

The Young And The Restless Spoilers – What Happens In Genoa City

What do you think Y&R fans, thumbs up or thumbs down on Suture’s return and possible extended stay? Beneath all that charm do you think he’s hiding something, namely Mariah Copeland (Camryn Grimes) and Abby’s unborn child?

We’re not sure what to think now. In the beginning it appeared he kidnapped Mariah, perhaps to play hero by rescuing her or maybe something more insidious was inside his mind? He and Abby lost a baby in the past and some fans speculated that he could be planning to take the baby in some sort of twisted twist of fate deal. What’s really going on here?