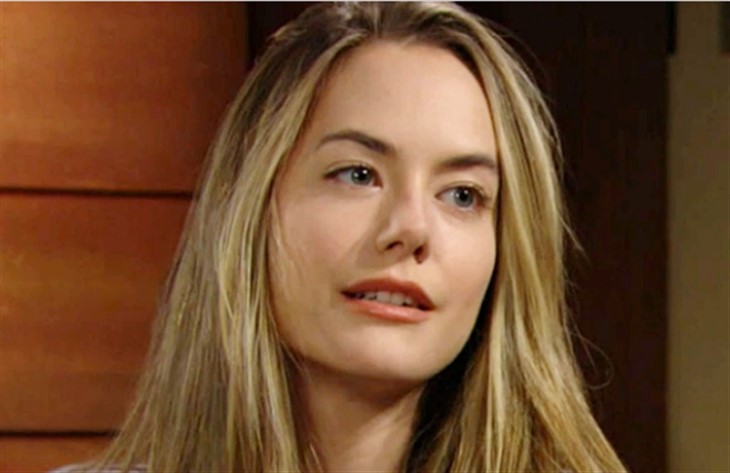 The Bold and the Beautiful (B&B) spoilers show Hope Spencer (Annika Noelle) is trying to put her marriage back on track. Her husband Liam Spencer (Scott Clifton) had a one-night stand with Steffy Forrester (Jacqueline MacInnes Wood).

Soon after the one-night stand, Steffy found out that she was pregnant on The Bold And The Beautiful. Steffy has been in a relationship with Dr. John Finnegan (Tanner Novlan). She had hoped that she was pregnant with Finn’s child and not Liam’s child. However, the paternity test proved that Liam was the father of Steffy’s baby.

Hope and Liam have been having trouble with their marriage because of the one-night stand and the fact that Liam was the father of Steffy’s baby. However, Thomas Forrester (Matthew Atkinson) found out that the father of Steffy’s baby was really Finn. His friend Vincent Walker (Joe LoCicero) had altered the results because he wanted Thomas to have a chance to get into a relationship with Hope. Thomas was upset with Vinny for deceiving everyone especially his sister Steffy.

The Bold and the Beautiful recaps and spoilers show Thomas went to Hope to let her know that Liam is not the father of Steffy’s baby. Hope was relieved to find out that Liam was not the father. She was upset that Vinny altered the test results. Hope was grateful that Thomas found out the truth. Hope told Liam that he was not the father of Steffy’s baby. He was upset to find out that he was not going to be a father. However, he was happy for Steffy and Finn. Hope wants to find a way to save her marriage with Liam.

Liam and his father Bill Spencer (Don Diamont) were out for a drive. They have ended up having a serious problem. Liam accidentally hit Vinny with the car. Liam wanted to help Vinny but could not because Vinny died at the scene. Liam passed out and Bill began to cover up the situation. He has been trying to keep Liam out of trouble for killing Vinny. Bill believes that Liam would go to jail for killing Vinny even though it was an accident. Liam had a reason to kill Vinny because of the altered paternity test.

According to B&B spoilers, Liam is filled with regret over his part in Vinny’s death. Bill wants Liam to think about Hope and his family with her. Liam is trying to put his regrets aside so that he can be with Hope again. Hope can see that Liam is having trouble with something. She wants to help him but Liam is keeping what happened to Vinny a secret from her.

Hope was with Thomas when he found out that Vinny was dead. She helped him to identify the body. Thomas feels guilt over what happened with Vinny. He had been shutting Vinny out of his life before his death. Hope has assured Thomas that Vinny knew that he still was his friend. Hope and Thomas have a complex past but they have become friends.

Thomas and Hope share a son Douglas Forrester (Henry Joseph Saimiri) on The Bold And The Beautiful. Thomas was with Douglas at the movies when Vinny died. Thomas wants to find the person that killed his friend. Hope wants to help Thomas to find who killed Vinny.

The Bold and The Beautiful Liam Spencer Gets His Wish, Hope Takes Him Back On #BB #BoldandBeautifulhttps://t.co/AIqalR3P3D

Bold and the Beautiful Hope wants to help Thomas and Liam. Hope wants to make her relationship with Liam work again. However, she does not know that Liam accidentally killed Vinny. Can Hope forgive Liam for not telling her the truth about what happened to Vinny? Hope wants to be a friend to Thomas.

Will Hope find out that Liam is the one who killed Vinny while helping Thomas? Would Hope turn to Thomas because Liam did not tell her about his part in Vinny’s death? Tune in to Bold and the Beautiful to find out what happens when Hope tries to support Liam and Thomas.  Keep checking Soap Opera Spy for more the Bold and the Beautiful spoilers, news, and updates.

Days Of Our Lives (DOOL) Spoilers: Belle Realizes Jan Framed Her, Can She Prove It?