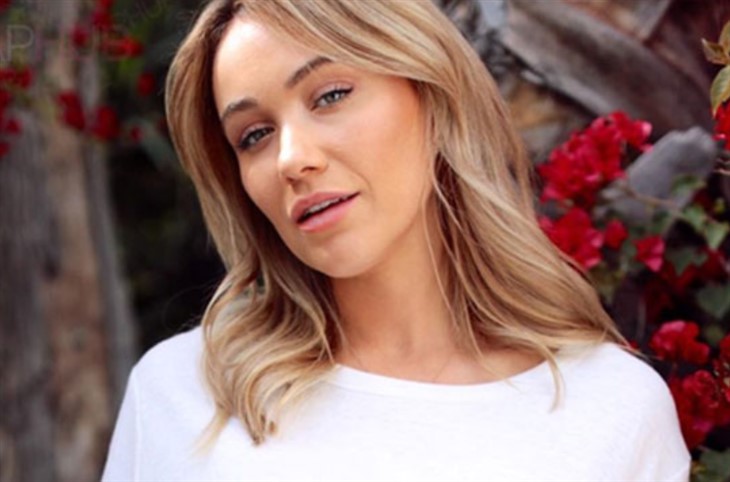 The Bold And The Beautiful (B&B) spoilers indicate that Katrina Bowden, who is a big part of the B&B cast, could be leaving for a new movie. Of course, actors and actresses come and go, and sometimes an outside project can mean an exit from their role whether it be permanent or temporary.

The Bold and The Beautiful’s Flo is a part of the Logan family which means she is a very important part of the show. Flo is also engaged to Wyatt Spencer (Darin Brooks). Normally, Flo and Wyatt are tangled up in the web that their respective mothers have weaved and it’s usually a huge mess. However, recently, Flo has not been seen or heard from even though her mother’s best friend, Quinn Forrester (Rena Sofer) has renewed her affair with Carter Walton (Lawrence Saint-Victor). Flo has not been seen since she visited Stephie Forrester (Jacqueline MacInnes Wood) with her newborn son in July.

The Bold And The Beautiful’s Twitter Page sparked concern about Bowden’s future. First of all, the post was a late birthday post. The post was roughly four days late causing fans to question if she was still on the show. Fans began to question where Flo has been lately and if she should be given a hot storyline so Flo is at least seen. Aren’t Flo and Wyatt supposed to be planning a huge wedding? Isn’t Wyatt’s mother being attacked by most of Flo’s family over her affair with Carter? Flo and Wyatt are constantly tied up in their mother’s lives so her absence is certainly noticed.

The Bold And The Beautiful Spoilers – Bowden Books A New Movie

The Bold And The Beautiful is not Bowden’s only project. Bowden has often made guest appearances on primetime shows and in movies as well. Bowden has even guest-starred as Tina Fey’s assistant Cerie on NBC’s 30 Rock. This could be her best-known role. Bowden’s new project is rumored to be in a new movie called Dead Wrong. The plot is about a guy how comes up with get-rich-quick schemes that affect everyone around him. Bowden stars are Billy’s wife and supports his scheme.

Fans are concerned because The Bold And The Beautiful tends to phase out characters that they are tired of and Flo’s lack of storyline is cause to worry. Although there has been no official word on Bowden’s status, fans are certainly concerned. Flo hasn’t had a big story since she was kidnapped by Sally Spectra (Courtney Hope). Hopefully, Flo will reappear and begin planning her wedding soon.