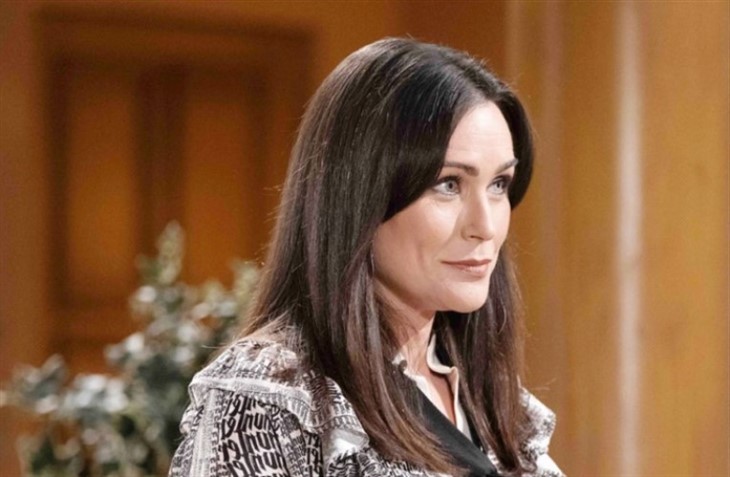 The Bold and the Beautiful (B&B) spoilers indicate that Quinn Fuller (Rena Sofer) will find herself in the family way.

Last week, Quinn gave in to temptation and slept with Carter Walton (Lawrence Saint-Victor). The show had been foreshadowing a possible hook-up between the two ever since they began spending time together. The moment was huge for B&B fans, who are now caught in a debate on which man Quinn should be with.

Quinn is a married woman, and she just made the biggest mistake by cheating on her husband. Now, Quinn and Carter are left to deal with the ramifications of their night together. Although the two want to forget about it, that may not be possible.

Quinn’s marital problems are what led her to seek solace from Carter. She and Eric Forrester (John McCook) have had plenty of issues over the years. Their latest problem was a lack of intimacy. With Eric uninterested in being intimate with his wife, it left Quinn feeling unwanted.

The Bold And The Beautiful (B&B) Spoilers Thursday, May 6: Quinn Has To Cover For Herself Fast

Needing a friend to talk to she confided in Carter. Quinn’s newfound friendship with Carter was surprising since the two have had little interaction. As expected, a connection formed between the two, one that’s going to grow stronger over time.

Although Quinn may have feelings for Carter, her heart still belongs to Eric. She’s come close to losing Eric several times, and she doesn’t want anything to come between them ever again. That’s why she’s going to sweep her one-night stand with Carter under the rug.

But Quinn’s tryst with Carter may come with a surprise.

A majority of the time when soap characters cheat, it usually results in a pregnancy. So the same could happen with Quinn.

Having Quinn become pregnant with Carter’s child would be a huge twist. Her secret would be out of the bag and there’s no way she can hide it.

Quinn would have a big dilemma on her hands as she contemplates her decision. She loves Eric and she’s upset that she betrayed him again. She doesn’t want to let this mistake be the end for them.

However, at the same time, she also has to take Carter’s feelings into consideration. He’s suffered plenty of heartache in his love life. If anyone deserves happiness, it’s him. Having a family is important to Carter. If he finds out Quinn’s pregnant, he’ll want to be part of the child’s life.

Quinn’s pregnancy will be her in quite a predicament. She loves both men and doesn’t want to hurt them, but in the end, she’ll have to break one of their hearts.

Will she be able to get Eric to forgive her and save her marriage? Or will she find love with Carter and their baby?