https://ourteentrends.com/category/the-bold-and-the-beautiful/
Latest soap opera spoilers and news for The Young and The Restless, Days of Our Lives, General Hospital and The Bold and the Beautiful. News and spoilers of all your favorite reality TV shows!

The Bold And The Beautiful (B&B) Spoilers: Quinn And Brooke At War Again – Paris’ Next Step 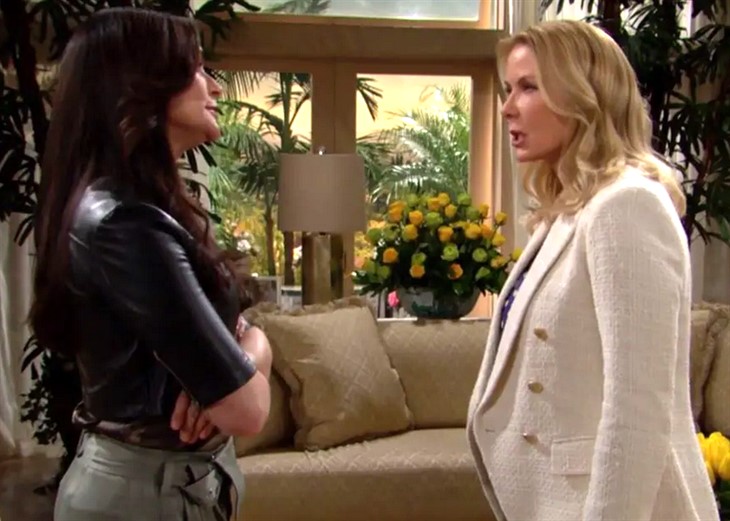 The Bold and the Beautiful spoilers for Tuesday, June 29, 2021, reveal in Los Angeles Brooke deciding to find another enemy besides Thomas.

The Bold And The Beautiful Spoilers: Brooke Is One Angry Woman

Brooke (Katherine Kelly Lang) has been all-consumed by Thomas (Matthew Atkinson) and the fact that Liam (Scott Clifton) asked him to look after Hope (Annika Noelle) and the kids while he is in prison. That’s the last man Brooke wants around her daughter, but out of sight, out of mind as Brooke hasn’t seen Thomas in a few days and neither has anyone else.

This time Brooke spars with Quinn (Rena Sofer), her former enemy who had a fling with Ridge, and then revealed Brooke’s kiss with Bill (Don Diamont) just when she and Ridge (Thorsten Kaye) were about to renew their wedding vows. She also knows that Quinn was behind that Las Vegas wedding debacle with Shauna (Denise Richards). When Brooke learns Eric and Quinn are about to renew their vows, she’s livid and lets Quinn know it. She also wonders how she can make the day miserable for Quinn…

Quinn has more than just Brooke to worry about. Paris (Diamond White) knows all about what she did with Carter (Lawrence Saint-Victor) and informs Quinn she still hasn’t decided whether to spill that ugly secret or not. Quinn already begged Paris not to tell all and told her all about how Zoe (Kiara Barnes) ruined Paris’s first date with Zende (Delon De Metz) by spiking her drink. See? Zoe isn’t such a great sister after all. Who cares if she is being kept in the dark by the man she plans to marry.

Paris still isn’t sold so on Tuesday, Quinn does some more begging. And she begs loudly, right in the Forrester Creations offices. Talking about the affair at a high volume in those same offices with Shauna is exactly how Paris learned Quinn and Carter slept together.

Clearly, Quinn learned absolutely nothing from that very recent mistake because here she is doing it again. And this time someone else hears what really went on and thinks she has the perfect way to enact some revenge, but first she needs to make sure she gets the story exactly right… Stay tuned to The Bold and the Beautiful weekdays to see how this story plays out.