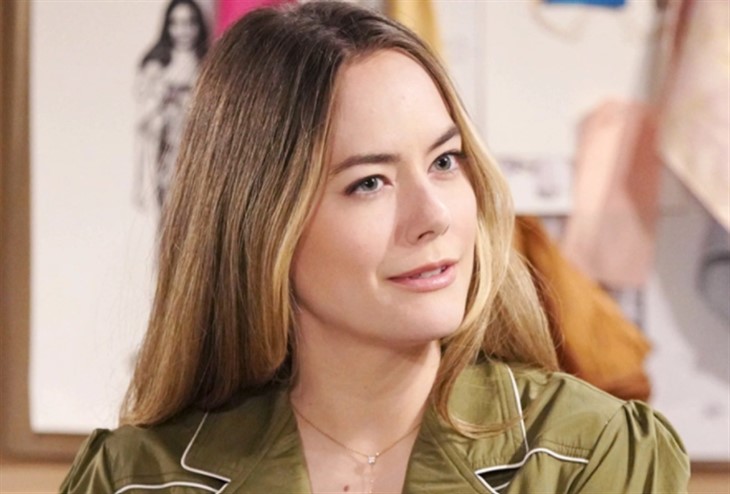 The Bold and the Beautiful (B&B) spoilers document that Hope Spencer (Annika Noelle) made, what she felt, was a necessary decision. Her split from Liam Spencer (Scott Clifton) might not be forever, or even for a long period of time. But they are separated.

Liam regretted what his free will led him to do with Steffy Forrester (Jacqueline MacInnes Wood) at the cliff house. But he was hopeful that John Finnegan’s (Tanner Novlan) tag as the father of her baby was good news for Lope. As it turns out, it might not have been.

Hardcore fans are not surprised by the subject header to this section, as it is one of this legendary character’s calling cards. Brooke Logan Forrester (Katherine Kelly Lang) is injecting herself into Hope’s life.

Brooke feels that Hope and Thomas Forrester (Matthew Atkinson) should never be a romantic pairing. Lang’s iconic alter ego, which is one of only two characters that have been on B&B since its inception in 1987 (with the other being Eric Forrester, John McCook), made a vow to her eternal love, Ridge Forrester (Thorsten Kaye).

Her tell to Ridge was followed by a direct statement to Thomas. He will not be with Hope. Brooke’s intention is to keep Lope from splitting, which will influence Hope’s thinking to a certain degree.

Hope hasn’t fallen out of love. She still cares for Liam as deeply as she ever has, but is rightfully feeling dismayed by this latest betrayal.

Teasers indicate that Liam won’t be reachable for awhile. This could be tied to the also teased murder of one of B&B’s characters in coming days. Time will tell how that part of the storyline flows, which is potential wink to who is killed off.

Liam’s disappearance, or whatever the absence proves to be, will make an impact on Hope. That could lead to a soon then expected Lope revival or at least a hastened reconsideration.

Liam may or may not be involved in the coming killing. Assuming his is, then Clifton’s character will be on a new and surely compelling plot path.

But if Liam isn’t involved in someone’s murder, then it’s reasonable to believe that he will seek refuge in isolation in order to sort out his thoughts. Liam’s introspective nature would lead him to some remote location in order to find inner peace.