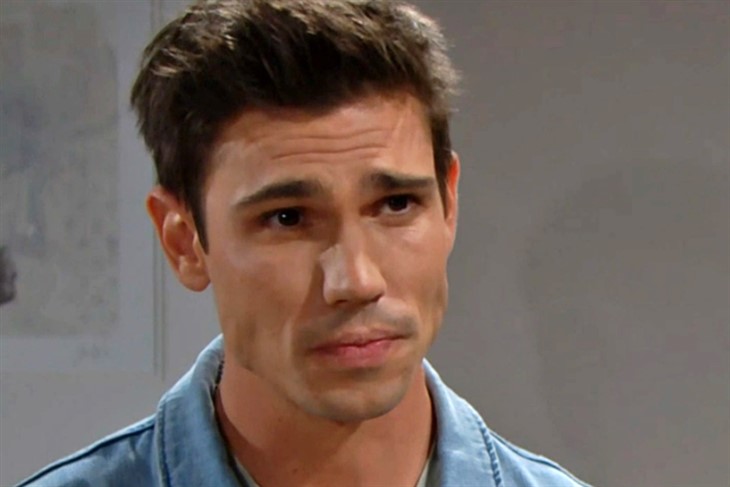 The Bold and the Beautiful (B&B) spoilers reveal that in Los Angeles John Finnegan (Tanner Novlan) and Steffy Forrester (Jacqueline MacInnes Wood) split up. However, fate brings the paternity truth out just as Steffy’s leaving L.A. However, can Finn get to the woman he loves before he loses her — and his baby — forever? Keep reading to get all the exciting details!

The Bold And The Beautiful Spoilers – Why ‘Sinn’ Splits Up

B&B spoilers reveal that Steffy loves that Finn is willing to stick by her and help raise the baby despite it being Liam Spencer’s (Scott Clifton). She knows he was devastated when they got the paternity results. However, she didn’t realize just how much his heart was breaking every single day. That is, until she overhears a painful conversation. Once she learns how much pain Finn is in, she decides to break up with him. Steffy loves him so much that she’s willing to let him go so he can find happiness. This scene reportedly will air on March 11.

Steffy makes another life-changing decision in addition to the breakup. She’s leaving L.A. to transfer to a division of the company. We are thinking it might be the Paris office she goes to. It will make it easier to stop running into Finn and will also give Liam and Hope Logan (Annika Noelle) a chance to fix their relationship.

The Bold And The Beautiful Spoilers – John Finnegan Gets Paternity Bombshell

The Bold and the Beautiful spoilers reveal that March 19 will be a day “Sinn” fans will never forget. Steffy is on the private jet ready to head to the city that will be her new home. While she’s buckling up, Finn is being told that Vinny Walker (Joe LoCicero) switched the paternity test. When Finn hears the words, “you are the father of Steffy’s baby,” Finn feels a combination of shock and overwhelming joy. But he makes a worrying realization… Steffy’s plane is due to take off right now.

But with Steffy’s plane leaving in just a few minutes, it will be a miracle if he makes it to the airport in time. He’ll never forgive himself if he doesn’t try. So he races to get to Steffy before the jet takes off. He can’t lose both Steffy and their baby. Fate takes over and somehow, Finn beats the clock and gets to the plan just as it was about to go down the runway. Finn tells Steffy about the paternity test being switched and that he’s the father, not Liam. This will definitely be a must-see episode for “Sinn” shippers, so make sure to tune in on March 19 to see Finn and Steffy be brought back together again.