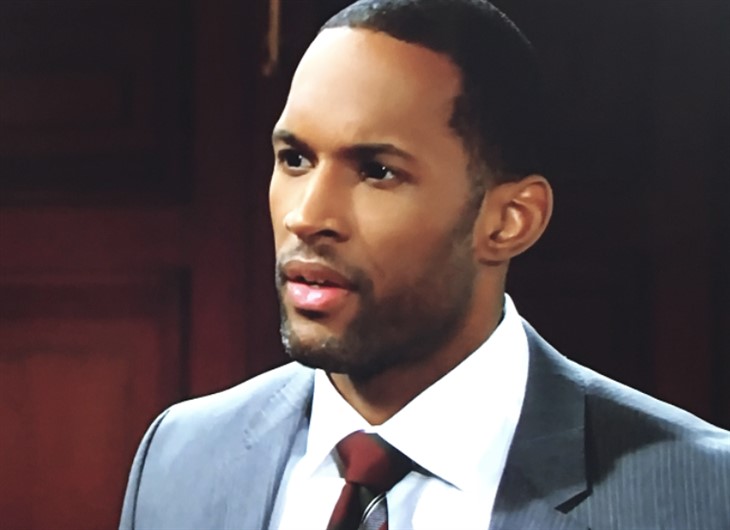 The Bold and the Beautiful (B&B) spoilers for Thursday, June 10, 2021, reveal in Los Angeles Carter trying to move on with his life by pretending something never, ever happened.

The Bold and the Beautiful Spoilers: Carter Gets Down On One Knee

Carter (Lawrence Saint-Victor) thinks if you pretend something didn’t happen then it just didn’t happen. He has Zoe (Kiara Barnes) back and there’s no reason for her to ever know he slept with Quinn (Rena Sofer). To that end, he has to take things back to where they were before and propose. He already did this a few months back and it took Zoe by complete surprise because it was so sudden and perhaps she was not ready. That didn’t stop her from saying yes.

And it looks like she’s ready to say yes again thinking Quinn solved all her problems and helped Carter see that he really should forgive Zoe’s flirty text messages with Zende (Delon De Metz). Little does she know the problems Quinn has actually caused. The truth is bound to come out and when it does, there will be hell to pay for Quinn and Carter.

It also seems that someone finding out happens sooner rather than later when Paris (Diamond White) overhears a conversation she really shouldn’t hear and she’s determined to get to the bottom of things for her sister’s sake. She realizes Carter isn’t the man she thought he was and also not the man Zoe thinks he is. She also discovers Quinn might not be the good friend she purported herself to be, something else that will hurt Zoe.

And now Zoe is about to marry this man and spend the rest of her soap life with him. Paris knows she must get the whole truth to save Zoe from heartache but where does she even start?

Will she enlist Zende to help her? When they learn what Quinn and Carter really did and how many times they did it, they’re going to have to tell Zoe or will they confront the culprits first? Zoe learning what Carter did is certainly a way to write Kiara Barnes off the show. Stay tuned to The Bold and the Beautiful weekdays to see how this story plays out.