The Bold And The Beautiful (B&B) Spoilers: Bill Sends Liam On The Run When Police Get Too Close 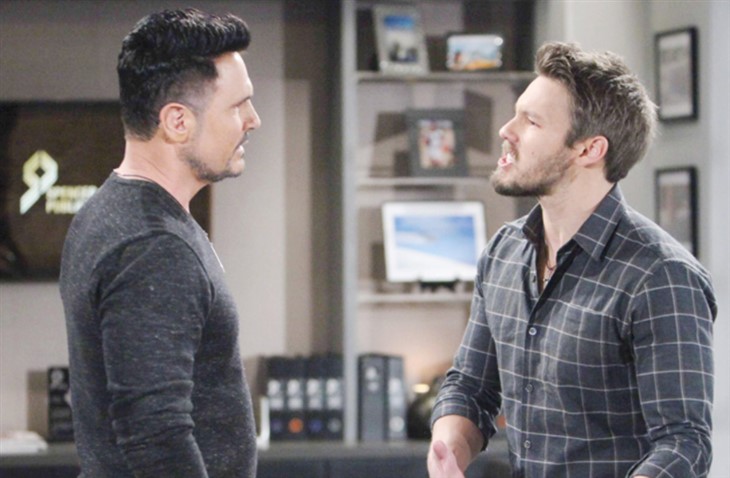 The Bold and the Beautiful (B&B) spoilers reveal that Bill Spencer (Don Diamont) fears Liam Spencer (Scott Clifton) is going to blab their secret. So, he gets the bright idea to send Liam way on “vacation” right in the middle of a murder investigation. Of course, the police won’t believe the “vacation” story. To them, it will look like Liam’s going on the run.

The Bold And The Beautiful Spoilers – Liam Spencer’s Crumbles

B&B spoilers reveal that Liam is not handling this deadly secret. Bill knows that his son isn’t built like him. He understands that Liam is struggling and feels for his son. However, he disagrees that the truth will set Liam free. Instead, he is convinced that the truth will send Liam to prison. As this storyline progresses, Bill will feel compelled to take drastic action to prevent Liam from going to prison for Vinny Walker’s (Joe LoCicero) murder.

Not only is Liam confessing a real problem to Bill, the police are starting to ask too many questions. Bill knows it is only a matter of time before Liam cracks. He is not going to allow that to happen. In the new issue of Soap Opera Digest, Diamont explains what Bill’s new plan is and why he won’t allow Liam to tell the truth.

The Bold And The Beautiful Spoilers – Bill Spencer’s Bad Decision

The Bold and the Beautiful spoilers reveal that Bill decides the best and safest option is to send Liam away. He will go on “vacation” until the police stop snooping around. He also thinks the break will be good for Liam and set his head on straight.

“Bill is not happy. Liam is tormented. Bill cannot say this enough, ‘You are in trouble,’ and he really has to drive that home because Liam in his naivete with, ‘The truth will set you free’ and all of that, well, the truth can also lock you up. That’s what Bill continually tries to drive home to Liam, and Liam is just agonizing. Bill is certainly not happy Deputy Chief Bradley Baker [Dan Martin] is sniffing around

B&B Spoilers – Going On The Run

Bill can justify Liam’s disappearance all he wants. However, there is a reason why police tell everyone not to leave town until the investigation is over. So, Bill sending Liam on “holiday” or “vacation” is going to look very suspicious. In fact, it will actually look like Liam’s gone on the run. It’s only a matter of time before Liam is caught and no amount of money, lawyers, or excuses will be able to save him. We will have to keep watching the CBS soap to find out how this story ends.

Days Of Our Lives (DOOL) Spoilers: Desperate Paulina Turns To Lani For Help With Her Wayward Daughter