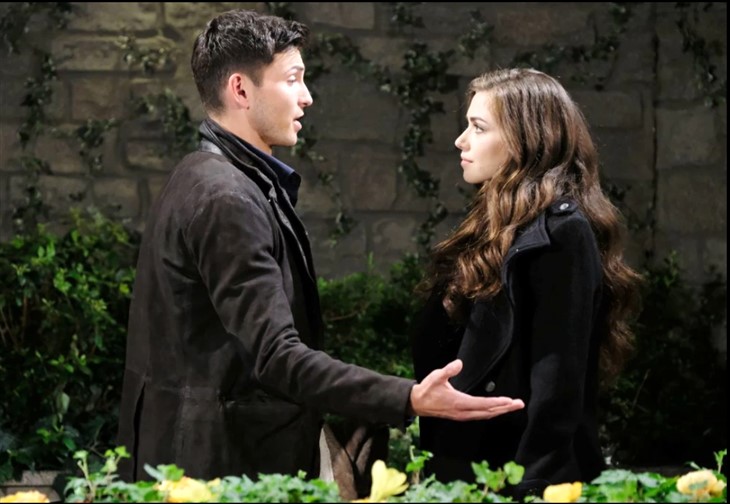 Shocking Days of Our Lives (DOOL) spoilers tease that Ben Weston’s (Robert Scott Wilson) reunion with Ciara Weston (Victoria Konefal) doesn’t go quite as planned in an upcoming episode of Days of Our Lives. It turns out that Ciara had a head injury that has given her amnesia and she doesn’t know who either one of them are!

Days Of Our Lives Spoilers – Ciara Weston Is Alive, But Not Quite Well

Ben has been waiting for word on Ciara with Dr. Marlena Evans (Deidre Hall) as Ciara had some significant injuries after he and Shawn Brady (Brandon Beemer) rescued her, as well as Claire Brady (Isabel Durant) after Evan Frears aka Christian Maddox (Brock Kelly) had taken her hostage as well!

Days of Our Lives recaps show Ciara had broken a pipe in an effort to break out of the plexiglass walled room she was in, but she severed a gas line in the process and there was an explosion! Ben managed to find her and carry her out, but he was on the verge of panic by the time she was rushed to the operating room at Salem University Hospital.

Days Of Our Lives (DOOL) Spoilers: Gwen Claims To Be Pregnant With Chad’s Baby?

Ben and Marlena were warned that she may have internal injuries and possibly serious brain trauma. It seemed like an indeterminable amount of time had passed before Dr. Kayla Brady (Mary Beth Evans) emerged from the operating room to inform Ben, Marlena, Shawn and Claire that Ciara survived the operation. There had been swelling to the brain and while that could cause a comatose state while the brain heals, so far everything looked good. All her EKGs and EEGs appeared to be normal, and it would be just a waiting game until she woke up.

DOOL spoilers tease Marlena is able to empathize and to relate Ciara’s situation to her husband’s, John Black, (Drake Hogestyn) as far as warning things may be a little different mentally because of the affect to Ciara’s brain from the injuries.

After what seems like an eternity, Ciara finally awakes! Shawn has called their mother and let her know that Ciara was found alive, and called other friends and family as well. She cannot have too many visitors because of the trauma her body and brain have suffered, but Ben can go in.

The only problem is, Days of Our Lives spoilers reveal Ciara doesn’t know him! In fact, she doesn’t even know who she is, or anyone else! It would seem that Ciara Alice has gone through the looking glass and into wonderland and doesn’t know who she is or where she is either!

He goes to the hospital room door and shouts for help, and Kayla, Marlena, Shawn and Claire all converge upon the hospital room door and Kayla quickly checks Ciara’s stats. Marlena isn’t one hundred percent certain because she hasn’t looked at any of her EEGs, but she tells Ben that Ciara may have amnesia because her brain is trying to protect her from fearful memories until she is stronger.

New Days of Our Lives spoilers say Kayla agrees that it is very common for a trauma victim to block out not only what happened to them, but to sometimes develop a kind of amnesia because of the brain healing and the mind healing as well. Kayla and Marlena agree that all they can do is wait and see again, because Ciara’s brain waves do not show anything other than normal results. Eventually, her memory will come back, but it may take some time!