In the wake of Oprah Winfrey’s interview with Meghan Markle and Prince Harry, all eyes are on Meghan. Markle dropped one bombshell after another, confessing to suicidal thoughts, accusing royal insiders of racism, and responding to the accusations that Meghan had made Kate Middleton cry.

Wrong, insisted Markle about the claims that she bullied Kate. Instead, Meghan asserted that Middleton was the one who did the bullying.

“It made me cry, and it really hurt my feelings,” claimed Markle about the disagreement with Kate.

And the tone of accusation continued, with Meghan claiming that the Palace and royal family members like Middleton were the ones at fault.

What Do Kate Middleton And Prince William’s Nonprofit Efforts Reveal?

However, even as Kate suddenly is getting a bad rap, a look at her history with her husband Prince William reveals that the two have focused on mental health causes. Just two days prior to Meghan’s tell-all interview with Oprah, Kate and William’s Instagram featured a story of a texting service that actually saved one suicidal preteen.

In their Instagram post and accompanying video, Middleton and her husband talk to a family about the impact of @GiveUsAShoutInsta (https://www.instagram.com/GiveUsAShoutInsta/).

This confidential texting service, totally free and available 24 hours a day, 7 days a week, offers mental health support to anyone and everyone who needs it. For the family of 12-year-old Jack, the service supported by Kate and William made the difference between life and death.

The youngster was suicidal when he sought help from Shout. Middleton and her husband helped to research and develop the confidential service, which is the first of its kind in the United Kingdom. The Royal Foundation donated the money to establish Shout. 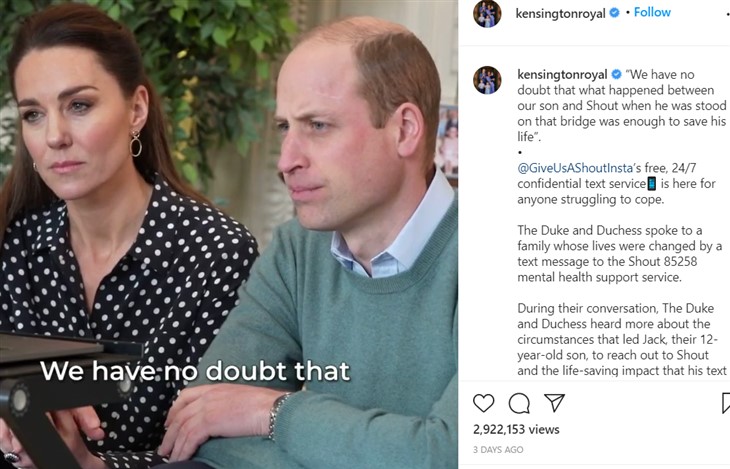 In addition, Middleton expressed her belief that mental health awareness should be part of the educational curriculum in schools. During her discussion with the family whose 12-year-old son sought help from Shout, Kate listened to the young man’s story.

His anxiety and mental health issues had made him suicidal. And then, through the confidential Shout texting service, he sought help from the police.

Talking about raising awareness of mental health concerns, the 12-year-old admitted that the topic is “ignored quite a lot in some schools.”

Kate emphasized that she agreed with him about the importance of making mental health discussions “familiar,” adding, “Within schools, if it is normalised and made part of life and school life so that when people are going through a hard time, they know how to talk about it.”

Where Does The Oprah Interview Leave Kate And Meghan?

What does the future hold for Kate and Meghan? After revealing in detail how Middleton allegedly made her cry before the wedding, Markle added that she did not want “to be disparaging to anyone.”

Meghan continued to note that the week prior to the wedding was “really hard,” claiming that Kate “was upset about something. But she owned it, and she apologized, and she brought me flowers and a note apologizing. She did what I would do if I knew that I hurt someone, to just take accountability for it.”

Sadly, that comment about Kate taking accountability for her actions may be lost in all the bombshells that Markle and Prince Harry dropped to Oprah. But we hope that in the future, Prince William, Kate Middleton, Meghan Markle, and Prince Harry may reconcile and reunite.