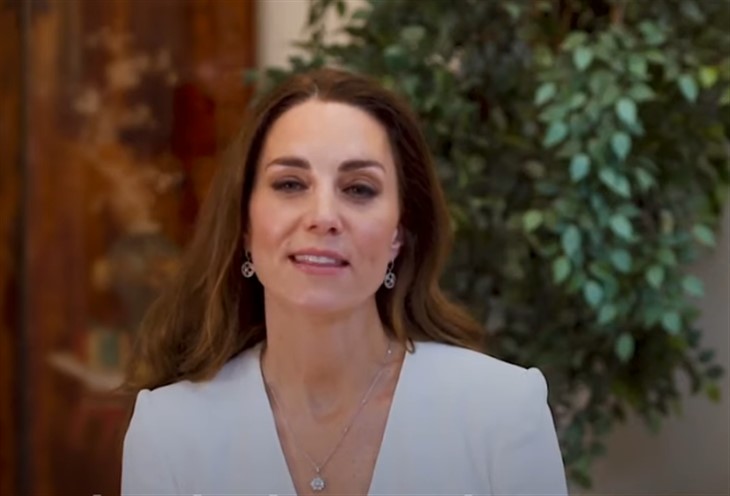 British royal family news reveals that Kate Middleton Duchess of Cambridge is in isolation due to being exposed to coronavirus. Eagle eyes fans now believe they have pinpointed the exact moment she was given the distressing news.

Was Kate in the Royal Box at Wimbledon when she was told? According to the Daily Mail, “Kate is understood to have been alerted personally and was not ‘pinged’ by the NHS Test and Trace app, leaving the All England Club at 5pm on Friday – significantly earlier than she has done in previous years – and missing the match involving her friend Andy Murray.”

According to The Times, “She was alerted after taking her seat next to the Duke of Kent and in front of Body Coach Joe Wicks, but left ‘immediately’ after being told she had come close to someone who tested positive for coronavirus.”

Some commentators have expressed dismay at Middleton, despite having both vaccine doses, four negative Covid tests and no symptoms in the past week, being put into isolation due to the government’s current test and trace rules.

Her isolation comes against a backdrop of an anxious country waiting for a full lifting of COVID protocol with, “the timetable … slower than many had hoped, and potentially … millions of people will be caught after ‘Freedom Day’ on July 19.”

Friday Kate was driven out of Wimbledon and taken to Kensington Palace, and under the current guidelines she cannot leave nor have visitors and has been instructed to avoid contact with those in her home.

One outlet captured the general mood of a country tired of COVID restrictions by reporting, “Her absurd quarantine prevented the Duchess from attending the NHS’ 73rd birthday celebrations with William at St Paul’s Cathedral and Buckingham Palace yesterday.”

Sources say she followed COVID rules including wearing a mask when walking about but not while sitting in the stands. Her isolation period includes the day on which she was in contact with the person who tested positive so theoretically she will be out of isolation this weekend.

Kensington Palace released this statement about the situation: “Last week The Duchess of Cambridge came into contact with someone who has subsequently tested positive for Covid-19. Her Royal Highness is not experiencing any symptoms, but is following all relevant government guidelines and is self-isolating at home.”

Royal Family News: Meghan Markle Freaked Out The Palace From The Get Go

The Bold And The Beautiful Spoilers: Can Finn Handle His Family Matters?