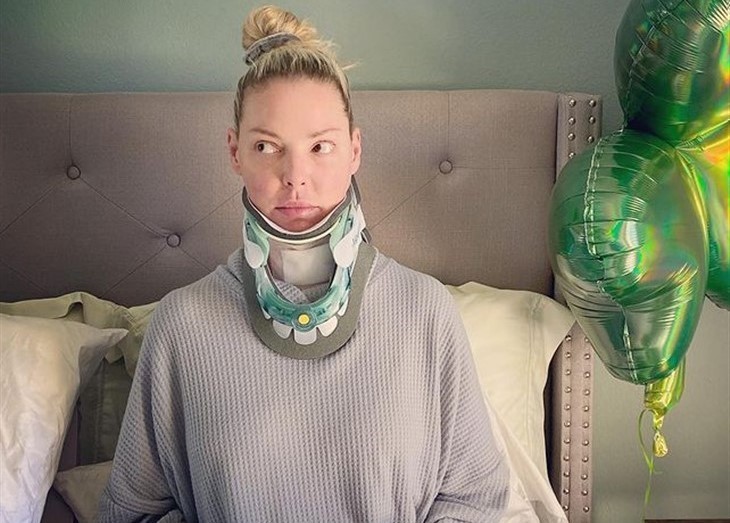 It’s official, Katherine Heigl can now stand on her neck for as long as she wants, does she want to do that? Not yet anyway, but for the Firefly Lane actress, anything is possible. On a more serious note, the actress is overjoyed that she received such good care from her doctors and can no longer feel the excruciating pain she’d had to deal with for a while now.

Katherine Heigl shared a while ago that the first trip that they’ve taken since the pandemic was for the purpose of going to LA and getting to deal with a herniated disc in her neck.

It was definitely wonderful that she went to the hospital with her supporting husband, Josh Kelly, who served to keep her laughing during the obviously stressful time.

She shared a really hilarious video of her husband pretending to read her medical charts. And then he starts out like “Well ma’am, I’ve got some bad news, your brain is absolutely gorgeous!” he announced to a laughing Katherine, and then he proceeds to comment that it’s the right size, just about the size of his glasses, and he does actually carry out the measurement with his glasses.

Katherine captioned the post, “Another @joshbkelley gem. This is definitely the guy you want by your side during a health crisis. Though…I don’t think I’d bring him to the OB with me. Those jokes would just be too far.”

Earlier, she’d shared another funny clip of her husband harmonizing with a coffee maker. 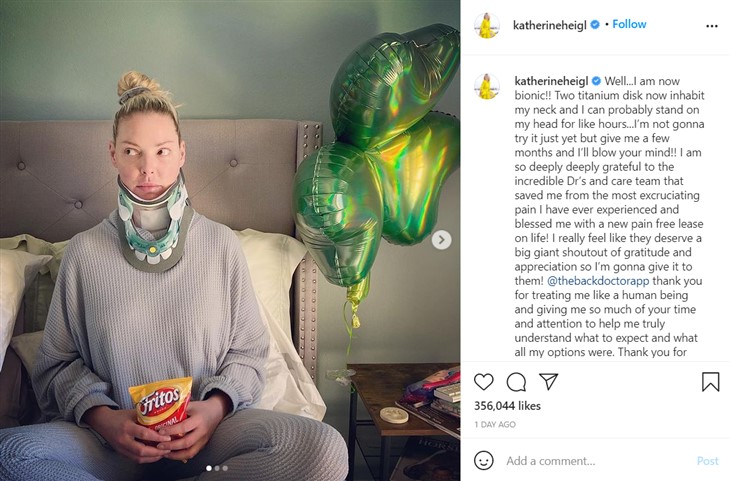 Katherine Heigl  News – Getting Treatment for her neck injury

“Well… I am now bionic,” Heigl captioned a makeup-free picture of herself sitting on a bed looking beautiful with a box of Fritos and green balloons hanging beside her, “two titanium discs now inhabit my neck,” she added.

Just a week ago she had herniated a disc in her neck, and recently underwent surgery to get two titanium discs implanted in her neck. Although the mother of three didn’t share how she got the injuries, she did share her treatment process, along with a picture of her x-rays, with one showing the two titanium discs.

“I am so deeply deeply grateful to the incredible Dr’s and care team that saved me from the most excruciating pain I have ever experienced and blessed me with a new pain free lease on life! I really feel like they deserve a big giant shoutout of gratitude and appreciation so I’m gonna give it to them! The Back Doctor App thank you for treating me like a human being.”

She also thanked them for making her feel comfortable and well taken care of, as she headed for a scary surgery and hospital stay.

She ended the post on a very cheerful note, wishing everyone a Happy St. Patrick’s Day and revealing that she’s been blessed with the luck of the Irish.

Fans who had been through similar experiences shared their accounts, while wishing her a fast and full recovery.

“Omg I know exactly how you feel! I was catching a patient from a fall and herniated my neck! I have titanium plates and screws in my neck as well as another one not fused! It’s a journey to recovery but if I can beat the odds you can too! Speedy recovery & blessings!”

Katherine Heigl has always been known for her jovial and playful spirit and can naturally uplift one’s spirit, and I think she outdid herself by making people feel safe about the whole process. I mean, you want to get neck surgery for your neck injuries, big deal, Katherine did it and came out smiling.

The Young And The Restless (Y&R) Spoilers: 5 Things To Know About Faith Newman…