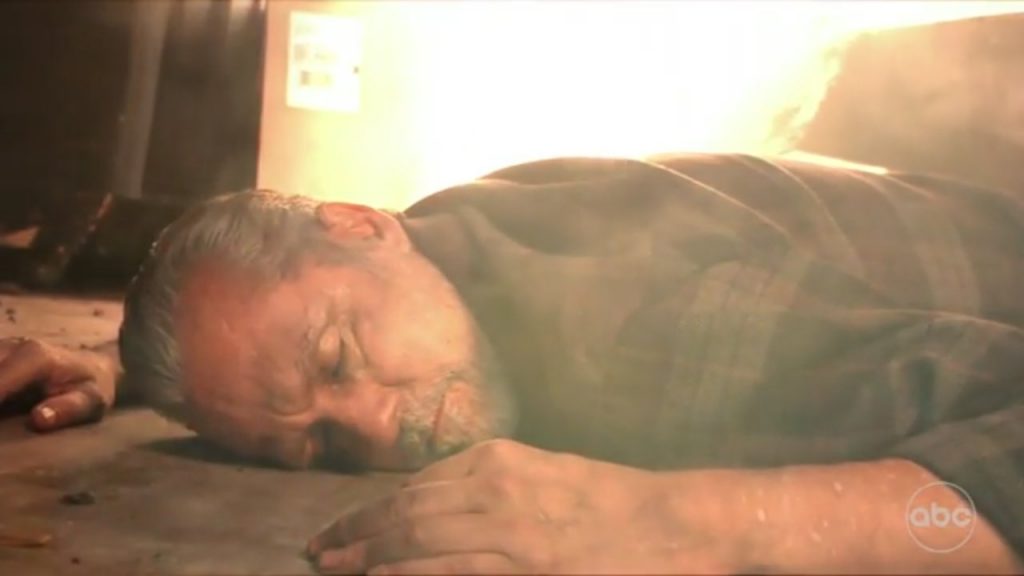 General Hospital (GH) spoilers for Thursday, September 16, 2021, reveal Smike laying under a beam in a fiery mess as The Tan-O burns down. Will Sonny emerge when it’s all over?

General Hospital Spoilers – A Bump On The Head Is All It Takes?

If you want to do a cliched amnesia story, have the amnesiac get bumped on the head and see his memory return. We have a feeling that’s exactly what GH is doing with Sonny (Maurice Benard). He saved Nina Reeves, a beam fell on him, and we know he will live because he is Sonny Corinthos and needs to show up in Port Charles the same night that Jason Morgan weds his wife.

Back in Port Charles, everyone is at the church preparing for the nuptials. (A church wedding? And where are Jason’s kids? Michael doesn’t count.) Even the Five Families are there conspiring, as Jason (Steve Burton) hopes Brick (Stephen A. Smith) and Spinelli (Bradford Anderson) will take care of that little problem.

As Maxie Jones (Kirsten Storms) tries her best to make sure the entire wedding goes off without a hitch, she gets a call from Jax (Ingo Rademacher) of all people. He has a variety of things he might want to tell her. Will he mention she might want to stop the wedding because Sonny is alive? Does he tell her Peter August (Wes Ramsey)showed up in Nixon Falls and tried to burn Nina to a crisp? The possibilities are endless.

And where are Anna Devane (Finola Hughes) and Valentin Cassadine (James Patrick Stuart)? It’s taking them longer to get to Nixon Falls than anyone else who’s just popped in on Nina over the last six months.

Drama At The Jarly Wedding

Trina Robinson (Sydney Mikayla) knows something is about to go wrong because things have been going too right. She tells Cam (Will Lipton) it’s been a quiet day so far and she’s right. But so much is about to happen. Perhaps the teens better pop the popcorn.

Meanwhile, Olivia (Lisa LoCicero) remains angry at Austin (Roger Howarth) and Ned (Wally Kurth) as Ned tries to reason with her about Leo. Ned thinks Austin might be onto something and Leo may need a little extra help, but Olivia doesn’t want to hear it and thinks Leo is just fine. Stay tuned to General Hospital weekdays to see how these stories play out.